Book Review: OF STARFISH TIDES AND OTHER TALES 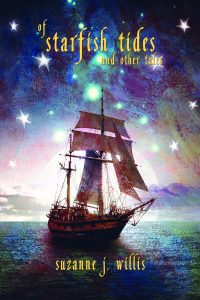 Of Starfish Tides and Other Tales
Suzanne J. Willis
Trepidatio Publishing (May 6, 2022)
Reviewed by Andrew Byers

I’ve always been a fan of fantasy, but mostly gave up on the genre years ago when it became clear that many fantasy authors were more interested in producing epic doorstopper series rather than something genuinely original. I’m delighted to say that in Of Starfish Tides and Other Tales Suzanne J. Willis has produced a masterful collection of seventeen of her dark fantasy fiction stories that has rejuvenated my love of the fantasy, Willis’ brand of dark fantasy in particular. I’d love to peer inside her imagination—it must be full of dark fae and talking crows and strange magics.

Because there are so many stories, each different from the last, that I can’t devote as much space to all of them as I’d like, so let me delve a little deeper into a few of my favorites that illustrate the strengths of the collection as a whole.

Let me note that one of the first stories in the collection, “A Silver Thread between Worlds,” as being almost a kind of archetypal Willis story. Here we’ve got really rich and beautiful prose about humans and their interactions with the faerie realm, and what it is that some faeries want from humans. They’re creepy and chilling and inscrutable, as the Fae should always be. I would also note “Rag and Bone Heart” as one of my very favorite stories in the collection. This is nothing less than a superb tale of revenge by a young girl avenging her lost sister, who was sent off to serve a king with the Midas touch. Grim and wonderful. Willis is perhaps at her very best when writing about dark fantasy kingdoms and the whims of faeries.

There’s really neat worldbuilding throughout Of Starfish Tides; each of the stories sets up a wonderfully detailed world of its own. For example, in the world of “The Psychometrist,” memories can be imprinted in objects or places and be retrieved, transferred as memories, or even be cleansed/erased. They can also be bought and sold, and the people doing the buying and selling of memories, it seems, tend to be interested in the darkest kinds of resonances of the past. “Sundark and Winterling” provides a neat little setting populated with ghosts and shape-shifting dragons and dragon bones that still retain the dragon’s personality.

“North, at the End of the World” was a super dark story, which caught me by surprise and hit me unexpectedly hard. Told from the perspective of a finch after an apocalypse has destroyed human civilization and, well…we learn that the few remaining humans are just another food source for the remaining animals. It’s never fun learning that you’re just a pile of meat.

I would be remiss if I didn’t specifically call out the excellent “Blackhearts and Sorrowsong.” This long story is probably worth the price of admission alone. Mara is the last gargoyle in a city dominated by an oppressive religion that has exterminated her people and enslaved her for countless human generations. There’s a great deal more to the story, but suffice it to say that it’s wonderful. It also sets up a sequel nicely; I’d love to see Willis return to these characters and setting.

I’ve only begun to scratch the surface of all the elements Willis includes in Of Starfish Tides. To whet your appetite, here’s a taste of what else you’ll find scattered about in these stories: marionettes and other animated puppets; magical maps; books of tattooed skin after the end of the world; dark magic of various sorts; and scarecrows that are much, more than they seem.

One other brief note on these stories: I found them highly inspirational—after reading each of them, I found my imagination flying free and creating all kinds of fanciful ideas about dark fae and dragons and strange fantastical cities, which is the hallmark of genuinely inspired (and inspiring) prose, so well done there. Suzanne J. Willis is a master wordsmith and Of Starfish Tides and Other Tales is definitely recommended.