Book Review: NO ONE WILL HEAR YOUR SCREAMS 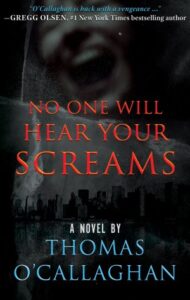 No One Will Hear Your Screams
Thomas O’Callaghan
Wild Blue Press (May 9, 2020)
Reviewed by Ray Palen

The novel NO ONE WILL HEAR YOUR SCREAMS begins with a brutal murder. A woman is buried and incapacitated while a crazed man takes an instrument that resembles an elongated harpoon to pierce her with. The instrument is actually a makeshift version of one used by any undertaker, and the captured woman suffers the horrific fate of having her body filled with embalming fluid while she is still alive.

The man responsible for this evil deed is named Tilden, and he has a simple agenda—to take down every prostitute he can find. He promises that when he is done, every one of those vile sluts will be tracked down, cleansed, and obliterated. Even though Tilden is focused on making his claims a reality, they are still horrendous crimes, and someone cannot simply go around murdering people. Tilden himself will be tracked down throughout this novel by a trio of law enforcement professionals: NYPD Homicide Commander Lieutenant John Driscoll, and his handpicked team of Sergeant Margaret Aligante and Detective Cedric Thomlinson.

When the body of the young woman mentioned previously is found, Driscoll and company realize they are facing an evil villain who knew what he was doing. It was a form of centrifugal pump that was used to embalm this victim. The first thing they recognize is that the killer had to be in the medical profession or an undertaker. Secondly, when they find a locket of Saint Vitalis of Gaza under the victim’s tongue, it alerts them that the killer is also going to be targeting ‘women of the evening,’ as Vitalis of Gaza was the patron saint of prostitutes.

Tilden becomes even more determined and enraged when one intended victim turns the tables on him. A prostitute he had picked up with intention of murdering is able to subdue Tilden. When he awakes, he is bleeding rectally and in great pain. He finds himself in the hospital, having undergone major surgery to repair the tears to his anus and colon caused by brutal penetration with a large object. It’s impossible to not be specific and graphic with a novel like this, because of the evil we are dealing with. NO ONE WILL HEAR YOUR SCREAMS is no mere crime drama, as the villainous Tilden is the embodiment of evil, and readers will learn his backstory will include major resentment against the Catholic Church, specifically nuns.

Driscoll and his team have nothing to focus on except for catching this killer. When they make the connection to his religious resentment, Driscoll questions Father Clement at a church in upstate New York’s Catskill Mountains. He is curious about the torching of a church in New York City fifteen years earlier, which he believes may be tied to the current serial murders. The flashbacks to Tilden’s past are horrific all on their own and provide some incentive for why he is doing what he is doing. One of the more evil deeds witnessed in this novel is when Tilden literally crucifies an elderly nun, Sister Agathon, who he personally feels should be tried for counts of child abuse. Whether the reader feels any sympathy for Tilden is purely subjective, and it must be remembered that the person giving us this personal history is most definitely criminally insane.

The investigation run by the Driscoll trio is top-notch, as we watch them follow clue after clue, each one leading them closer to Tilden. Meanwhile, Tilden’s murders become more and more brutal, and this is what adds the necessary horror tones to what could have been a routine crime story. NO ONE WILL HEAR YOUR SCREAMS is a solid read and one that requires a strong stomach and physical constitution to get through.