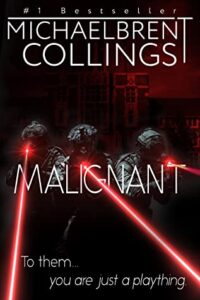 Michaelbrent Colings is a reliably fun crafter of horror thrillers; some rely on supernatural elements and others are content to showcase man’s inhumanity to man without any supernatural elements at all. Collings’ new book Malignant falls into the latter category. Malignant is potentially a controversial book because of its subject matter: a group of criminals take the students and faculty of an elite private school hostage, and it doesn’t end well for almost anyone. While there’s not a ton of gruesomeness described in excruciating detail, it is abundantly clear what happens to the victims. But this is ultimately a morality play, like a lot of Collings’ fiction, with shades of grey abounding. The hostage standoff is no simple criminal matter, nor is it the work of politically-minded terrorists. This is a tale of revenge, or perhaps justice, depending on one’s perspective, though I would descend too far into spoiler territory if I said much more about the reason why the criminals have taken over the school.

Malignant has a slightly unusual structure: it is framed as a true crime work of non-fiction—pretty true to that genre of writing, I think—that has been penned by Connie Kendall, a journalist who becomes involves in the action and then after all is said and done, and the law enforcement and legal actions have come to a close, has written what we have before us.

The setting of Malignant is Reina High School, a private high school for the wealthy and powerful. As it turns out, many of the students have significant discipline problems and are involved with some pretty “adult” activities; their teachers and parents have come to find them almost ungovernable. Many of those same teachers, staff members, and parents are themselves involved in nefarious activities. There aren’t many innocents in Malignant. Reina is one of those kinds of places where senators’ children rub shoulders with the sons of Russian oligarchs. To be sure, not all of the teachers and staff are bad actors—some decent people do become embroiled in the chaos.

The cast of characters is a fascinating one, with most having secret lives and motives that take a while to uncover. Precipitating the crisis, we have the criminals, all concealing their true identities. Their leaders are Teacher and Lady, and their jumpsuited minions are distinguished only be their willingness to carry out Teacher’s ruthless orders and the colored armbands they wear. The individual students and faculty who are held hostage represent not just the usual assortment of archetypal figures we associate with high school, but individuals who are all far more than they seem at first glance. Lastly, we have a pair of detectives, Rick Montano and his partner Vincent Eberhardt, trying to bring the situation to a close while saving as many lives as they can. They are mostly Everymen who are just trying to do their jobs—good detectives and good men—who have to deal with law enforcement bureaucracy and the diabolical scheme of Teacher.

The plot proceeds with the inevitability of a Greek tragedy: doom is coming, but there are plenty of twists and turns along the way that present lots of surprises. Action is pretty fast and constant, even though we’re talking about a hostage standoff, which could, in the hands of a lesser writer, be too static. As always, Collings’ prose is smooth and flowing. Recommended, especially if you’re already familiar with Collings’ thrillers or in the mood for a novel about bad people doing terrible things to even worse people.