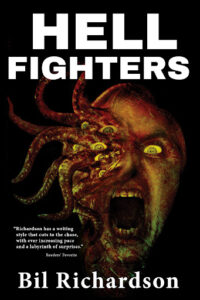 Much like chocolate and peanut butter, do you like your Lovecraftian horrors mixed with action-adventure thrillers? Hell Fighters is for fans of Lovecraft’s work who like their protagonists to be two-fisted men (and women) of action rather than shrinking violets who faint or descend into madness at the first sight of something monstrous or inhuman.

Max Heller is a new professor at Miskatonic University who moves to Arkham and quickly comes to realize that the locale is home to decades of mysterious disappearances, strange happenings, and sinister cults in league with…whatever inhabits the wilderness west of Arkham. Heller’s curiosity gets the better of him and he tries to investigate the matter on his own, nearly dying a couple times, but just managing to get some acquaintances killed. He is soon contacted by a small secret society that is trying to stop a scheme that will ultimately spell doom not only for Arkham, but the world as a whole.

The horrors themselves are intriguing, and not merely copycats of Lovecraft’s monstrosities; some are truly grotesque examples of body horror and all have cosmic elements (or at least origins). Heller and his compatriots are outgunned and outclassed by the horrors they face, and face devastating losses as they continue their fight.

Hell Fighters is full of over-the-top action—in fact, the novel is a lot more action-oriented than I had originally anticipated. Richardson’s prose is well-crafted and action and pacing are smooth and fast. Characterization is just deep enough for a fun, pulpy novel that doesn’t take itself too seriously. I would describe Hell Fighters as a mix of cosmic horror—unspeakable monstrosities extruding themselves into our reality and having terrible effects on the hapless humans who blunder into their machinations—and the kind of slapstick horror comedy that you’d see in films like Evil Dead. Things sometimes get absurd in the final third of the novel as the tension (and stakes) ratchet up.

A fun novel with some genuinely interesting elements of cosmic peril and action. Recommended.