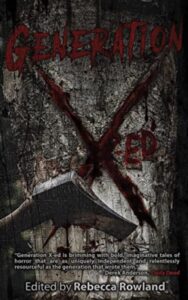 A massive volume assembling twenty-three new horror stories, the present anthology provides many hours of pleasantly horrific reading. The quality of the included tales is frankly higher than I was expecting, also because, frankly, I was not familiar with any of the contributors.

On the other hand, by now I am acquainted with the editorial skill of editor Rebecca Rowland, and that convinced me that book would have not been a waste of time.

And I was right. Some of the stories therein really stand out, and I will briefly focus on them.

“Sacrifices” by Douglas Ford is a dark, puzzling story where, in a near future, secrets are waiting to be revealed, disclosing the true nature of a deceivingly normal reality.

In “Get Away from Me” by Kevin David Anderson, a car accident occurring during a blizzard brings about unexpected horrific events involving the two drivers.

“Paper Dolls” by Glynn Owen Barrass is a creepy tale where the author, despite a rather thin plot, manages to create an atmosphere of terror which keeps the reader totally bewitched.

Eldon Litchfield contributes “Prey Heed to the Preacher Man,” a fine example of graphic horror featuring a man who gets lost while driving his car and ends up in a small village where an unexplicable horror is waiting for him,  while Mark Towse pens “ Tough Break,” an unsettling story revolving around a pair of glasses endowed with peculiar properties.

“Waiting for the Worms” by Erica  Ruppert is a masterful piece depicting a gloomy scenario of squalor, poverty and sickness.

On the whole an interesting collection of dark stories, apt to disquiet and entertain the readers.