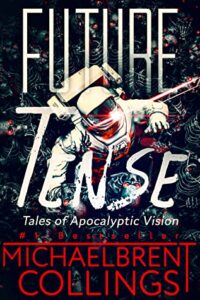 I’ve read—and reviewed—a lot of Michaelbrent Collings’ novels, but have only ever read a couple of his shorter works. I was delighted to take a look at this new collection of his horror short fiction. Future Tense contains nine short stories and a long novella, “The Stranger Inside,” that takes up about 40% of the collection’s word count. This collection is a mix of horror—some supernatural, and some more of the implacable serial killer variety—and science fiction dystopia and post-apocalyptic stories, with at least one pure whimsy story thrown in for good measure. It’s a very solid collection that offers thrills, gore, and thought-provoking terror.

Let me give you a quick rundown of my impressions of the individual stories.

“Jingle All the Way”: A woman has killed herself in a future dystopia in which her body, her very DNA, is not her own, and is being used by a corporate juggernaut for experimentation and marketing purposes. Like a Black Mirror episode.

“I Am an Ocean”: A dystopian future run by an AI that has perfectly ordered human society, finding everyone a job to do that suits their aptitudes. Told from the perspective of a young man who is trying to figure out what his place in that society will be. Grimly chilling.

“The Floor Is Lava”: An intriguing novelette about a group of high-school friends who get back together after many years. One of them is an eccentric tech billionaire. Phenomenal characterization of a group of people who have known (and loved) each other for most of their lives—they are really brought to life here. The story itself raises more questions than answers when it becomes surrealistic, but I liked it.

“Lucid Dreams”: Jane is a lonely woman who sees faces of people standing behind her in her mirror, then later dreams of them, experiencing snippets of their lives. Then she comes to realize that she’s dreaming about these people shortly before their deaths.

“The Shortest Con”: This one is pretty wacky. Collings and his various author friends are secretly wardens in a magical society that protects the Earth (and especially fandom) from things that go bump in the night. This one is set during a poker game. Fun, though probably means a lot more if you’re a fan of all the authors involved.

“End of Shift”: A man with an…unusual, one-of-a-kind occupation (no spoilers here) transforms his role into that of avenger and protector of children. Even though I knew what was going on from the outset, this one was an entertaining, dark look at a familiar figure.

“That’ll Sell”: A writer of a popular science fiction franchise starts being followed—and confronted—by the protagonist of her series. Not only is it clear that he’s not the fictional character she thought she had imagined, but he’s (understandably) upset at all the tragedies that she has subjected him and his loved ones to in her novels.

“I Can Do This All Night”: This one’s a pretty grim look at a dystopian culmination of the archetypal “battle between the sexes.” It’s always fun to see cartoon villains get their comeuppance. Brutal violence.

“Button Man”: A postapocalyptic yarn about a society that looks back on those (presumably us) who precipitated the apocalypse that collapsed human civilization and sent humanity back to subsistence agriculture (hint: it’s not fondly).

“The Stranger Inside”: This is Collings’ novella, initially published a decade ago, that introduced the character Legion, who is the protagonist of his series that kicks off with the novel Strangers (I reviewed that novel here). Legion is a serial killer, and not even a “nice” one like Dexter. My impression is that this novella has not been available for some time, and I’ve certainly not read it previously. Strangers, the full-blown novel that this novella later became, is a richer, more complicated tale, and Collings added at least one very different, major element to the nameless antagonist in Strangers, but it’s fascinating to read this shorter original novella. This is the story of a family—two parents and two teenage children—who are bedeviled and trapped in their home by a nameless man who seems to know everything about them, including their deepest, darkest secrets. And boy, do they all have secrets that they’d rather not share with each other. It’s a bit of a slasher premise, but with some interesting twists along the way.

Ultimately, this is a really enjoyable collection of horror and dystopian science fiction. I think it also serves as a good introduction to Collings’ work; if you enjoy what you see on offer here, I think the themes and styles are pretty representative of his longer fiction. Recommended.