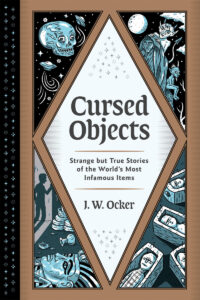 This non-fiction collection by J.W. Ocker is a cumulative collection of ancient and infamous objects from around the world and throughout the annals of occult history that still scare us.  With the popularity of the Conjuring films based on Ed and Lorraine Warren, we have been introduced to frightening, cursed objects such as the infamous Annabelle doll—which is contained in this collection and will surprise many who did not realize it was actually a Raggedy Ann doll.

It is easy to get lost inside this collection, and each object presented could very well merit their own novel.  Readers will clearly see how some of these objects influenced various horror stories and films—yet these are not fictional items, which is what makes them so much more frightening.

Some of my personal favorites from CURSED OBJECTS are:

CURSED OBJECTS make it clear that seemingly innocuous objects can possibly kill us, and this is what makes them so frightening. The bottom line is you don’t have to believe in cursed objects to be fascinated by them.