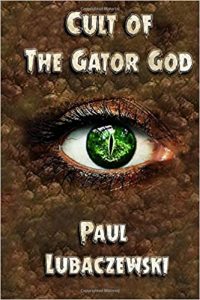 Environmental lawyer Bob Carey is relocated to Jacksonville, Florida, to fill the shoes of a lawyer who met his end in a boating accident—and to also make career amends for shining a light on the incompetence of the leading partner’s son. In this “fish out of water” tale, Bob is sent to gather information on illegal dumping.  Paired with scientist Steve, Bob meets some eccentric characters and an ancient being called Itori. Itori is the Gator God but she (yes, we are reminded several times of her biological sex) has a compassionate mind to match her monstrous body. Due to environmental monkeyshines, another creature of god-like proportions is encountered, and that monster is not as benevolent.

Cult of the Gator God is a comedy/horror, and it does have some truly humorous language and exchanges. The horror is more of the thriller type than the creature-feature implied by the title. There is plenty of action and intrigue and more than enough “isn’t Florida strange?” jokes.

The ancillary characters are charming: Bob’s girlfriend, Sarah, is a cute surf-board shop manager/scientist; Steve is quirky and amiable; the “Florida rednecks” are welcoming and open-minded about sharing space with a Gator God, especially a female one.  There is an interesting subplot involving the former tenant of Bob’s apartment who apparently ditched town prior to paying his bills. Bob, unfortunately, is the least likable character, as he spends most of the book examining his new surroundings with snobbish disdain. He is a bit of an anti-hero but not “anti” enough to turn the corner and become someone to root for.  There were also some slightly misogynistic comments that were part of the comedy and many of them could be attributed to Bob and his negative lens. In those instances, the comments were laughable. In other moments, they might be interpreted as the thoughts of the narrator/”editors”(who often interrupted the plot’s progress to provide commentary) and that would take me out of the story as that voice was meant to operate as a Greek chorus, as opposed to providing chauvinism in a tale that only includes two hot/sexy female characters, a generic/bitter secretary, and a gigantic female alligator.

Cult of the Gator God is a summer read/beach read. It is written in the same silly, Florida-centric vein as the humor/crime thrillers by Carl Hiaasen and Dave Barry.  It is the type of book you want to read with a margarita in hand and Jimmy Buffett in the background.