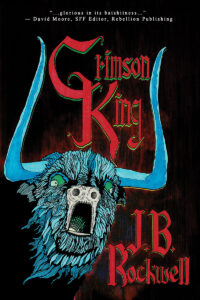 Crimson King starts with a simple premise that will seem very familiar: a ten-year-old boy named Casey is sent to spend the summer on his grandparents’ farm. Casey’s not a farm kid, so rural life seems pretty strange anyway, but when he’s sent to help his next-door neighbor with some chores, Casey realizes just how scary the neighbor’s new bull is. Normal bulls are pretty frightening beasts (let’s face it, they can be aggressive and can kill you without trying too hard), but there’s something off about this bull. It looks weird, it acts weird, and it seems way too fixated on Casey. Then, as more and more things start going wrong—horribly, violently, grotesquely wrong—on the neighbor’s farm, Casey really starts to get scared. Is this bull coming to kill him and his grandparents?

On the surface, this is a pretty straightforward story: a young boy gets frightened by weirdness in the world around him, and the grown-ups in his life aren’t quite willing to accept what he’s telling them. We’ve all read stories like this before, and probably experienced something very much like that growing up ourselves. But there’s a lot of atmosphere here and a growing sense of menace and violence as things go from bad to worse. Not a ton of gore here, but enough to get the message across.

Initially I wasn’t sure where this one was going, but found myself genuinely unsettled by the ending. Rockwell’s prose is effortless, and the plot moves quickly. There aren’t a lot of twists and turns here, but there’s clearly more than meets the eye here, and Rockwell brings it to a satisfying conclusion.