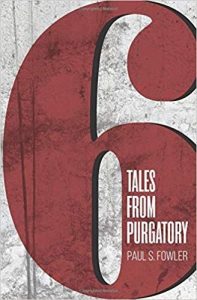 Welcome to Purgatory friends! A place that is neither Heaven nor Hell, but an odd combination of the two. According to my ancient Webster’s Dictionary, purgatory is a place where souls are further purified by suffering before being admitted to paradise. Paul S. Fowler shows us multiple variations of it in his recent release 6 Tales From Purgatory. The only sure thing about this nebulous place is that time loses all meaning here. It also appears that anyone can end up there for any reason, so stick close while we take a look around!

You may have heard the term “Heaven on Earth?” Well, in “Lilith’s Daughter,” Sheila is suffering purgatory on earth. Yeah, she’s alive and the owner of a physical body that she hates because her coworkers are assholes. They make rude comments about her plus-sized figure, something that is very wrong, and treat her like garbage. No one takes her seriously and most often she is disrespected or ignored. Top it all off with still being single and living in her Mom’s house. Even her job as an investigator at the Department of Health and Human Services is not a particularly desirable one. So, when she investigates the case of a child locked in the basement of a suburban home, the excitement is a welcome diversion. But it quickly becomes clear that this isn’t any run of the mill family case. Mega rich families, strange deaths, and a helpful nurse with insider information all lead to a very unique and powerful conclusion.

“Bound” is an intense piece about a college professor who does the wrong thing one too many times. Many of us who went to college are only too familiar with the persona of William. He’s a college professor that works very hard to fit in with his students. But his reasons for doing so are not noble ones, He’s not looking to improve the level of education by being more cool and relatable, no what this guy wants is to bed as many female students as possible. It’s a fun game, with no commitment or consequences. Well, for the professor anyway. But his latest dish decides to mix things up a bit and William ends up in a unique position. Enjoy!

Whew! I don’t know about you, but after that I feel like a break. Stress is very detrimental to the human body. It causes headaches and even skin lesions with its negative energy. So it’s not a surprise that Ronald feels absolutely horrible. His job as a travelling salesman is hard and requires a LOT of driving. The reason he’s working is his family, but he’s hardly ever home to receive their love. Instead, he spends too many nights in cheap motel rooms. He just wishes that…LOOK OUT! Whap! Ronald hits a deer with his car. When he comes to, he sees that the car is okay and heads on down the road to find…a Drive-In movie theater? Amazed and delighted, Ronald decides to pull in for the “Double Feature In Purgatory.” Everyone is nice, but there’s something about them that’s a bit different. So what? It’s time for the next picture and by the time Ronald settles in for that, he’s forgotten everything else.

I like this collection of stories coming from a place many people don’t know exists until it’s too late. 6 Tales From Purgatory scores a hearty FOUR AND A HALF STARS from this reviewer! Overall, great concepts and a large variety of stories. I just had a hard time getting into the longest piece in the book, “Love Story.” The time frame and style of story are just so different that it changed the flow of the book. I think it could be a great stand-alone novella and is a must for anyone who digs historical fiction. The good news about that, is “Love Story” will appeal to a wider audience – movie script anyone? Bottom line, 6 Tales From Purgatory is a cool read, grab a copy today!