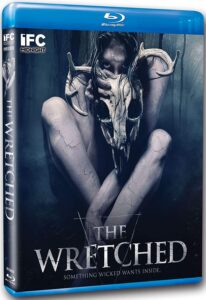 When this movie hit theaters earlier in the year, it did surprisingly well. But then, what else was at the theaters during all this quarantine craziness? In fact, that was the joke that I heard about this movie before seeing it. That it only did well because there was no competition. So with that in the back of my mind despite my best efforts to ignore it, I went it to this movie. So, was I pleasantly surprised by it, or were the doubting Thomases proven right? Let’s find out.

Here teenager Ben goes to stay with his recently estranged father for the summer and help him out at the marina where he works. You get some summer fun, confrontations with the local boating bullies, some unexpected young love. Oh, and a thousand-year-old-witch or dark fairy-tale horror (the movie is never 100% on what she/it is) coming out of the woods to eat children. You know, as they do. This baddie can shape change, alter memories, sling curses, and has a whole bag of nasty black magic tricks to play with, so what’s a young man to do to stop her from snacking on the town’s youth?

I love the mix of teen summer comedy and supernatural horror you get here. The acting by all involved is good, the direction by the two brothers is solid, and the scenes set in the witch-thing’s tree are particularly atmospheric. There is also a bit of a surprise to be had here that, for me, actually worked. That’s rare when films can pull that off, and I love when it happens. I also love how the evil witch-thing is used. It really does feel like something out of the grimmest of Grimm’s Fairy Tales, updated for a modern setting. It is completely alien from more human-like witches in its reasoning and looks. It makes its hunger for the flesh of children seem all the more real.

Let’s get to the extras on this new Blu-ray from IFC Midnight. There is an audio commentary track with the writers and directors, the Pierce brothers. There is also a second commentary with the composer Devin Burrows. A theatrical trailer is also included here. And that’s it. So it’s not bare bones, two commentaries are good, but as a fan of featurettes, interviews, and docs, I wish there was a little more here.

The Wretched was a nice surprise for me, as I ended up really liking it. This creepy tale of black magic, child killing, and monsters from the woods works, and I am very interested to see what the Pierce brothers do next. As for this effort, it comes out on Blu-ray August 11th and you should consider it highly recommended.