Blu-ray Review: THE DARK AND THE WICKED 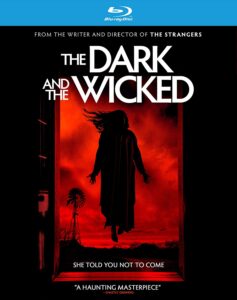 Another superpower team up between horror streaming service Shudder and the fine folks over at RLJE Films, and I couldn’t be happier. This is the new film by Bryan Bertino, the writer/director of The Strangers (2008) and The Monster (2016), two very good horror movies that set the bar high. So how does this latest effort measure up? Well, pack a bag, we’re going home, and let’s find out.

Here an adult son and daughter return to the family farm to be close to their dying, near-comatose father, despite their mother warning them to stay away. What starts off as depressing, morose, and a little weird soon becomes horrifying as people start dying, long-hidden secrets are uncovered, intrusive strangers pop up unexpectedly, and the unreal becomes manifest. This is a supernatural thriller absolutely steeped in atmosphere and dread. The horrors are ghostly, demonic, visceral, and psychological, and they are all expertly paced and portrayed. All of the small cast does great work in this film, but especially Marin Ireland and Michael Abbott Jr., who play the haunted siblings. They are the heart and soul of this movie, as they largely have to carry it on their shoulders, and they do so incredibly well. I loved both characters and found them very believable. Even when they made “stupid” decisions, I couldn’t honestly say I would have done anything differently, and that’s a rare thing for horror movie characters.

Kudos and praise must also go to writer and director Bryan Bertino, who has shown growth with every film he’s made, and mind you, he started off pretty damn strong. I feel that he is an overlooked modern master of horror, and I hope he stays in the genre, and I can’t wait to see what he does next. All that said, I did find the ending of this film to be a bit abrupt, and not as satisfying as what came before it. However, that did little to dampen my love for this film, and that should tell you something of this movie’s overall quality.

On to the extras on this new Blu-ray from RLJE Films, and sadly, this is where the story takes a depressing turn. No, this isn’t another bare-bones disc, but there’s not a lot of meat here, either. There is a Fantasia Q&A session with actors Marin Ireland and Michael Abbott Jr., and…that’s it. Now, am I the only person left in the world that likes and deeply misses DVD/BD extras? Is it because streaming movies (which was how this movie first came out) are such a thing that no one sees the need for special features? Well, I still see that need, and their absence is always felt by me.

The Dark and the Wicked is a great horror film and writer/director Bryan Bertino’s strongest movie to date. It is a measured, atmospheric, and most importantly, very effective slice of horror that should not be missed. If you have yet to catch it on Shudder, then you pick up this Blu-ray when it comes out December 15th. Consider it highly recommended.