Blu-ray Review: TALES FROM THE DARKSIDE 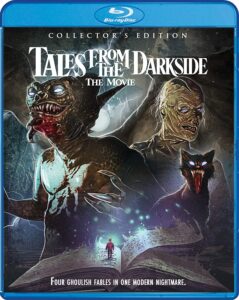 I love horror movie anthologies, and two of the best are Creepshow and Creepshow 2. Sadly, there NEVER WAS a Creepshow 3. I said there is NO CREEPSHOW 3, at all, and I will fight anyone that says different. Ahem, where was I? Oh yes, so why am I bringing up the Creepshow movies when I am reviewing 1990’s Tales from the Darkside movie? Well that’s because TftD was originally supposed to be Creepshow 3, and that would have made for a perfect trilogy. And it might have stopped the Creepshow train right there, up until the new anthology show of Shudder started, and wouldn’t that have been a better world for us all? But no, because of legal and rights issues, it had to come out under the title of the 80s TV anthology, Tales from the Darkside. Now the syndicated TV show was hit or miss at the best of times, and the series as a whole has not aged well. It still has a lot of classic episodes, but unfortunately it has far more meh to blah episodes. So does this theatrical take on the horror anthology hit the highs of the ONLY TWO Creepshow films, or does it hit the lows of the low budget television show at its worst of times? Well, brush up on you hieroglyphics, always be nice to cats, keep your promises, and let’s find out.

First off, Tales has a powerhouse of talent behind it. It takes stories from Sir Arthur Conan Doyle and Stephen King, and then has further writing work done by zombie master George A. Romero. Then there’s the talent in front of the camera, such as Debbie Harry, Matthew Lawrence, Christian Slater, Steve Buscemi, Julianne Moore, William Hickey, James Remar, Rae Dawn Chong, David (Buster Poindexter) Johansen, and more. That’s a whole lot of bang for your buck right there.

Now let’s get to the titular Tales themselves. It starts of with a fun and witchy wraparound segment about a woman kidnapping a young boy so she can cook him for her upcoming party, and the boy looking to buy time by reading her spooky stories. The first tale he tells is a classic by Sir Arthur Conan Doyle about college students and an ancient mummy. Yes, a mummy mini-movie, that’s awesome. Horror needs more mummy love, as long as it’s not that Dark Universe crap. So I love the first part of this flick, and it might be my favorite segment.

The next one is from a King story, with Romero doing the screenplay. It’s called, and about, a cat from hell. Here a hitman is hired by a “crazy” rich old man to kill a cat. Yep, that’s all. What could go wrong with that? This one is played for equal parts laughs and chills, and it is a whole lot of fun. Another strong winner.

The last one doesn’t have a distinguished pedigree, but it’s no slouch, either. Here a struggling artist sees something horrific one night, and he’s confronted by horror itself. He’s let off the hook, or bloody claws in this case, by promising never to tell anyone, no matter what, about what he witnessed. Then a nice love story follows and the man’s luck changes, but you know it can’t be that simple, right? This one’s story is straightforward and very much a slice of folklore, but it’s well done, with some awesome practical effects.

And that’s the movie, but what about the extras on this new Collector’s Edition Blu-ray from Scream Factory? Well, there is a new audio commentary track with co-producer David R. Kappes. There is also another, older commentary with director John Harrison and the late, great, and missed George A. Romero. There is a new and sizable making of/behind the scenes documentary on Tales from the Darkside, broken up into six chapters. This extra was very well done, informative, and a lot of fun. There are a theatrical trailer, TV spots, radio spots, a still gallery, a behind the scenes still gallery, and a behind the scenes footage compilation. All are great extras, but for me the documentary was the highlight here.

Tales from the Darkside is a really good and fun fright flick, and it’s never looked or sounded better than it does here. As far as anthologies go, it might be in the top three of all time. I guess you know what the other two are. Anyway, this Blu-ray comes out August 25th and I highly recommend it.