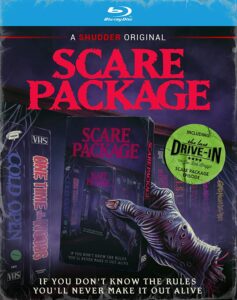 More exclusives from the online horror streaming service, Shudder, coming out to the masses on Blu-ray thanks to RLJE Films. This is a new horror anthology, and those are always welcome here. This is further bolstered by being featured on Joe Bob Briggs’ newest Drive-in Theater show, and that show is also included on this disc, which is just cool. But how is the movie in and of itself, and what are the other goodies, if any, on this latest release? Well, grab your video store card, let’s start browsing the horror aisle, and let’s find out.

The wraparound story for this horror/comedy anthology is one of the best parts of the movie as a whole. Here the owner of a video store takes on a new employee and tries to show him the ropes while a jealous hanger-on continually sticks around, adding his unwanted two cents to the proceedings. Stories of varying quality are told all during this, but really, watching these three guys in this segment was hilarious.

As for the short segments themselves, there are a hefty six shorts to watch. Like most anthologies, they’re a mixed bag in terms of quality, possibly breaking down the line of personal taste. Almost all of them blend humor and comedy, as it is obvious that was a mandate, but how well they do it is what sets the segments apart. One of them, “The Night He Came Back Again! Part IV: The Final Kill,” is a take on the unstoppable slasher killer, a la Jason Voorhees and what lengths his chosen final girl will go to to be rid of him once and for all. This was a bit of goofy, gory fun that, as a Friday the 13th fanboy, I really liked. Then there is the lackluster “Girls’ Night Out Of Body,” where a group of ladies eat a haunted lollipop and then become monsters because…? This segment wasn’t offensively bad, but it did feel like unnecessary filler. But hey, there still is the excellent wraparound story and four others that hopefully you’ll find more enjoyable.

On to the extras that come with this new Blu-ray from RLJE Films. Again, first and foremost, there is Joe Bob Briggs’ highly funny and insightful hosting of the feature that’s worth the price of admission alone. There is an audio commentary with co-creators Aaron Koontz and Cameron Burns. There are two short movies not included in the feature, and an ad for Rad Chad’s video store, where the wraparound takes place. Last but not least, there is a sizable blooper reel included. All in all, not a bad collection of goodies.

Scare Package is a mixed bag of horror shorts, but again, so are many anthologies. There are enough highs to warrant a watch, and the inclusion of the always delightful Joe Bob makes the whole thing more appealing. Fans of horror anthos, horror comedies, and/or of Mr. Briggs will not want to miss this one.