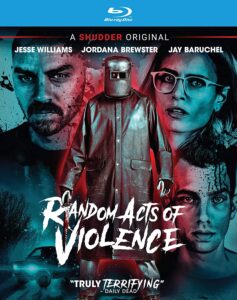 It seems more and more actors are become triple threats in the world of horror. Jay Baruchell (who played the voice of Hiccup in the How to Train Your Dragon movies) is the latest one to wear the actor/writer/director crown with this latest film released to horror streaming service Shudder. And like many Shudder exclusives, it has now come out on Blu-ray from RLJE Films. Is this passion project worth a watch and adding it to your home library? Well, grab your comic books, stay within the lines, and let’s find out.

A pair of comic book writers going on a road trip with their better halves to various cons and meet-and-greets soon notice that their comic may not be as factious as they once thought. Making a bloody and violent little book called “Slasherman” about a psycho that kills in style, it started off based on a real killer that was doing his thing during the author’s childhood, then stopped suddenly. After the real-world fatal facts were covered in graphic format, the comic writer continued the story with his own warped ideas, and the series became popular with horror fans. Unfortunately, art imitating life has now become life imitating art, as someone is acting out the new kills of Slasherman and making sure the creators of the book get a front-row seat to the carnage.

Jay Baruchel isn’t the lead here, but he does solid work as a supporting character and then does really good work in the writing and directing departments. Jesse Williams (I recognize him from the excellent The Cabin in the Woods) and Jordana (Fast and Furious) Brewster are the leads, and they are really good, as well. The kills are significantly bloody and graphic, there are some laughs to be had here, and like the “Slasherman” comic, the story is told with style.

On to the extras that RLJE Films put out on this new Blu-ray from Shudder. There isn’t a ton of goodies here; I would have loved to hear Jay Baruchel in a commentary track for this movie that he played such a large part in, but this disc isn’t exactly bare bones, either. There is an interview with Mr. Baruchel and then there are two featurettes: one is how you shoot an action scene, and then there is a basic look at the movie in general. So all in all, some pretty good stuff, I just wish there was more, which I guess is a good thing.

Random Acts of Violence is a dark, graphic (pun only slightly intended), bloody horror show, so fans of strictly good-time horror should beware. But if you like a bit of the darker stuff, well acted by all and well directed by Baruchel, then this will do that for you. This Blu-ray comes out on February 16th, and consider it recommended.