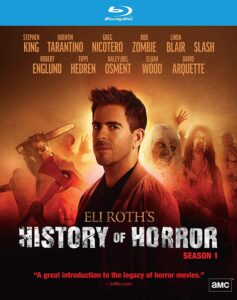 I love documentaries on or about horror movies, and this is a good one. It’s actually a series of seven one-hour docs, each on a different subgenre of horror. Okay, there is a two-part episode on slashers, but considering the amount of slasher movies out there, that’s fine with me. First aired on AMC, then jumping to their horror streaming service, Shudder, now on Blu-ray from AMC Studios, how does this lengthy documentary series hold up? Well, grab your guide of who’s who in horror, pack a lunch as this is one lengthy look, and let’s find out.

As said, there are seven episodes here to entice any horror fan, regardless of their specific spooky tastes. The episodes focus on zombies, slasher killers (twice), demons, killer creatures (a sort of catchall), vampires, and ghosts. In each episode, host Eli Roth talks to various luminaries of the spooky movie genre. To list all of the talking heads interviewed here would be quite the undertaking, but some of the big guns or most talked to include Stephen King, Joe Hill, Greg Nicotero, Rob Zombie, Quentin Tarantino, Elijah Wood, John Landis, Edgar Wright, Mick Garris, Anthony Timpone, and many, many more. Combine that impressive list of celebrities with the subject matter, with plenty of clips from the films, then sprinkle in trivia, insider info, and more, and you’ve got an enjoyable and extensive discussion of horror flicks and I am always down for that.

Let’s get to the extra goodies, not shown when the series originally aired, that have been collected for this new Blu-ray release. First and foremost there are longer, more extended interviews with many of the people found in the doc. Such names include King, Tarantino, Landis, Wright, Diablo Cody, Roger Corman, and Joe Dante. There is a featurette on how Abbot and Costello Meet Frankenstein influenced Quentin Tarantino, and another on how video games resurrected zombie movies. There is a third featurette asking the question, is horror sexist or feminist, a fourth about making movie monsters, and one last one about the long-lasting effects of horror movies on the fans. Altogether there are over two hours of special features on here, and I love that.

Eli Roth’s History of Horror is a fun, fast, and breezy look at one of my subjects: fright flicks. No, there are no real bombshell revelations here that any hardcore horror fan won’t already know, but it is an enjoyable trip down murderous, monsterific memory lane, and does a good job putting faces to the folks that make your favorite cinematic nightmares. I had a great time with this one and I’m betting you will, too, so consider this one highly recommended.