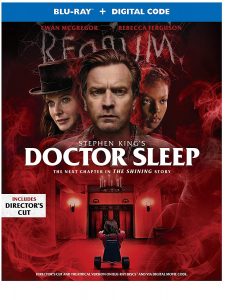 You got to feel for writer and director Mike Flanagan. I mean, he is one of the best horror filmmakers working today, no doubt, but he had the Herculean task of making a movie based on Stephen King’s novel Doctor Sleep, a sequel to his amazing novel The Shining. But Flanagan had to incorporate elements of Stanley Kubrick’s equally amazing movie of the same name: a movie that Mr. King famously did not like, and one that he ignored when he wrote Doctor Sleep, but one Mike Flanagan could not ignore because it has become such a part of the zeitgeist of cinema that its absence would have been felt. So how did he do?

The movie follows Danny Torrance, now a grown man who is battling his demons in the form of alcoholism and ghosts from the past. As in not just bad memories, but very real and dangerous ghosts. He becomes long-distance friends with a young girl who can also shine, who is being hunted by group of psychic vampires who torture, kill, and eat children who can shine. So yeah, it’s a very family-friendly sort of film.

It also bridges the King book and the 1980 Kubrick film incredibly well, so much so that Mr. King has given the new film his blessing. That in and of itself is no mean feat to pull off. And as someone that loved the book and the movie just about equally, no matter how different they were, I could not be happier. Mike Flanagan succeeds at creating a touching, moving film full of heart that, at the same time, has some truly horrifying and memorable scenes in it. It was also great to return to the Overlook Hotel and see how many nods and winks to the original movie and book were in here.

On to the extras that Warner Brothers have included in this new release. First and foremost, there is both the original, theatrical cut of this movie here, as well as a director’s cut that stands at an impressive nearly three hours long. That’s almost an extra half hour’s worth of cut scenes restored to the story. There is a featurette called “From Shining to Sleep” that has director Mike Flanagan and author Stephen King talking about the original story to the sequel to that groundbreaking haunted house (okay, hotel) tale. There is also a “making of” featurette, as well as a spotlight on the Overlook Hotel itself. All three featurettes are nice, but again, the real star is that massive director’s cut of the film.

Doctor Sleep is a very good film, so much so that it easily made my Top 10 Horror Movies of 2019 list. If you are a fan of the King haunted hotel book (either of them) or the Kubrick movie, then consider this film a must. I can not recommend this movie highly enough, and Mike Flanagan continues his unbroken winning streak with me.