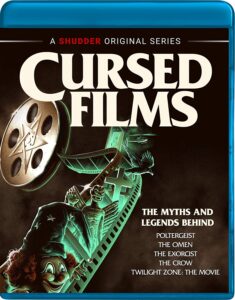 This is a new documentary series from Shudder, and I love that Shudder is bringing a lot of their stuff out to disc, unlike other streaming services like Prime and Netflix. I like it for the people who don’t have Shudder, because I might not always have the streaming service, or it might not always be a thing. Also, I just love docs about horror movies, and that’s what this is. But is it worth having in your home library? Well, let’s find out.

Now, if you’re a horror film fan of any stripe, then you have heard some, if not most, of the legends and myths about certain “cursed” movies. Films where people involved had died suddenly, or it looked like some supernatural force was out to stop them. Thankfully, this documentary doesn’t try to sell that narrative, push the spookiness of such stories, or treat the real-life events disrespectfully. It just relays the facts that, added together, do seem weird and a bit too coincidental, but it leaves it up to you to decide if curses and dark forces are at play.

As for the movies covered, like I say, the dark clouds that have eclipsed them for year have also made them legendary. The Exorcist and The Omen are covered, showing that Satan doesn’t like people telling tales about him. The Poltergeist episode details the deaths of the cast over the years. The Crow is about one tragic mistake that cost us the life of Brandon Lee, and the last one is on the Twilight Zone movie, where John Landis’ arrogance and stupidity caused three people to die. Yes, he’s a good filmmaker, but in my opinion, he never had to answer for his part in the deaths of two small children and the actor Vic Morrow. But I digress.

To tell these stories, Cursed Films has plenty of people interviewed, ranging from people who were actually involved with the movies discussed, like Linda Blair and Richard Donner, to fans of the movies, like Kane Hodder and Michael Berryman, who was actually in The Crow, but not really. Don’t worry, that story is covered here, too.

On to the extras that RLJE Entertainment put on this new Blu-ray. Well, there’s not a whole lot, but there is a director’s commentary for all five episodes, and on the films discussed. Considering the length of this documentary, that’s still pretty impressive.

Cursed Films is a long and pretty in-depth look at some of horror’s most infamous movies and the behind the scenes stories that have kept their making-of mythology alive. If you are a fan of movies about movies, then this is a good one, and I’d bet that you’ll like it. Consider it recommended. This comes out on Blu-ray August 18th.