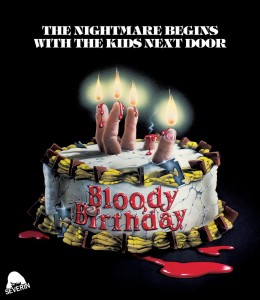 It’s the other birthday themed slasher from the 80s, the one you always saw the cover for in the video stores you haunted and hunted as a kid. If you’ve seen it, then skip ahead to the part where I discuss the special features on this new Blu-ray. If you haven’t, and all you know about this movie is the awesome birthday cake cover, then keep reading on and see if this latest present from Severin Entertainment is for you.

One day in 1970, during a solar eclipse, three babies are born, and because of that eclipse, they are born without consciences because that’s how that happens. Science! Well 10 years later and the eclipse kids are not only best friends, but complete sociopaths who decided to start killing people for fun. Being innocent looking kids, with amazingly advanced IQs for their age, the trio of terrifying tykes are quite successful at their murder game. Unfortunately for them, one of their classmates knows the truth, but who will believe him? Still, not wanting to take any chances, the conscienceless kids next target their snooping schoolmate and his older, teenage sister. What follows is a cool cat and mouse game, a few suspenseful scenes, and of course, some mischievous murders, complete with some deadly Home Alone like traps.

Okay, I called Bloody Birthday a slasher at the start of this review, but it’s really not. Sure, there are some elements of that subgenre here, and some people do get killed off in interesting ways, but that’s about it for the usual slasher hallmarks. It far more of a killer kids movie, a small but notable subgenre of horror with such titles as Children of the Corn, the far more simple titled The Children, and the far more awesomely titled Who Can Kill a Child?  This one is a bit more slasherrific than those other movies, but it is far less so than say Friday the 13th, Halloween, or the rest of the splat pack. If you are a fan of evil children movies, then you’ll get more out of this birthday surprise than if you’re only a connoisseur of stalk and slash flicks.

Now despite what I just said, this movie still hangs on to the slasher label tenaciously. So much so, that one of the special features on this new Blu-ray is a featurette called “A Brief History of Slashers” that runs 15 minutes long and comes complete with faux VHS tracking static. While kind of short, it is well done and a nice trip down slasher lane. More directly linked to Bloody Birthday, are an audio interview with director Ed Hunt that’s about an hour long and another interview, this one with video, with actress Lori Lethin that’s 10 minutes in length. A theatrical trailer brings this grab bag of goodies to a close.

Bloody Birthday is a well-made, shot, and acted slice of killer kiddie fun, drizzled in 80s sauce, which makes it all the tastier to me. To further entice you, this new Blu-ray has it looking better than ever before. If you’re a fan of this weird little flick, consider this edition a must have. If you’ve never seen it, give it a try, I’m betting you’ll like it. Consider it well recommended.