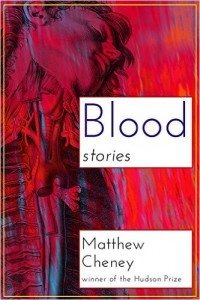 “It wasn’t love, I don’t think, because we didn’t really have a lot to talk about or any real deep interest in each other as people, out in the world, the real world, but we had this connection, this bodily connection, and it was glorious, we just lived in bed together, and it was in his bed that I felt – for the first time in so long – that I felt alive.”

Blood is a book I may not have come across had I not been contacted by Black Lawrence Press, but I’m glad I decided to check it out, because there’s some wonderful stuff in Matthew Cheney’s debut collection. In the best stories, Jeff VanderMeer’s cover blurb rings true. There’s “… heartbreak, solitude, and adventure in equal measure.” I’ll say a few things about my personal highlights here.

The title of “Lonesome Road” is well-suited. It’s lyrical tale of a man and a woman who have both experienced profound loss. They meet and form a tenuous connection, but he’s seeking answers in a most unusual way, and both wonder if perhaps it’s best not to think about what may happen after the death of our earthly bodies.

“How Far to Englishman’s Bay” begins on a melancholic note, with a divorced bookstore owner deciding, on his fiftieth birthday, to leave his old life behind. Drawn to the ocean by a mysterious compulsion, he hits the road and doesn’t look back. As it turns out, he’s not quite the one behind the wheel, and the road he’s on takes a very dark turn.

“Lacuna” is a historical fiction revenge tale of sorts, in which an abused and degraded man seeks out his tormentors and arrives at an unexpected conclusion. A certain famous writer of dark tales features prominently.

“The Voice” is a dreamlike flash fiction piece about a lonely man who lies in bed listening to a voice that becomes his sole companion, consumes his life, and abruptly leaves.

In “Thin,” the memories and neuroses of a socially awkward man take over his life along with a particularly nasty toothache.

“The Last Elegy” is a haunting and tender love story narrated by a writer of elegies who is enraptured by a man on the verge of gender transition. The fear and vulnerability of love are laid bare, alongside the uncertainty of change, and the story is delivered through some of the most quietly stunning prose in the collection.

Flashes of absurd humor complement the atmosphere of “A Map of the Everywhere.” It’s another love story, a lilting romp through a surreal landscape and the mysterious topography of the heart.

Some of the stories lean heavily toward the experimental, which does clash at times with the more straightforward approach of the others. Cheney states in the Acknowledgments that they were written over a span of fifteen years, which may be a factor in the disparity of tone and structure. Despite the change in style from tale to tale, the voice in each one is unique and utterly convincing. There are highs and lows, but the highs are exhilarating, and the lows just fall flat more than anything. If you’re in the market for some literary weirdness with a lot of heart, Blood is a good choice.