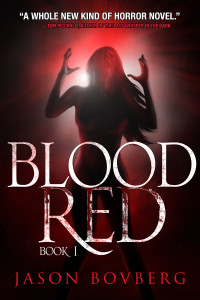 The tertiary characters in Bovberg’s Blood Red could have only hoped for the experience Ovid described.  Instead, they are infected by a damning red light that causes them to first appear dead, and then evolve into creatures with a highly unusual gait and a hankering for strange sustenance.

Blood Red covers the first 24 hours of a mysterious apocalypse in which people, with the exception of a few (and the reason they are an exception is very clever), apparently die in their sleep.  The difference between these bodies and traditional corpses is that the afflicted have a spongy feel to them and they each have a red glowing light that burns any survivor who tries to go near it.

Blood Red’s main character is Rachel, an emotionally wounded and world weary teen.  Rachel’s introduction provides very brief flashbacks to moments of minor rebellion, but once the world “ends,” she quickly matures to assume a heroic role in a decimated world.  Her transformation from college student to savior mirrors the de-evolution of the bodies that she finds that fateful day.

Bovberg presented himself with a daunting task for the first portion of his book: his plot is hyper-focused on “sole survivor” Rachel.  This forces him to rely on a great deal of descriptive prose and internal dialogue which becomes slightly repetitive.  There are only so many ways in which one can describe the bodies, the crashed cars and airplanes, the utter emptiness and fear. Furthermore, Rachel is an incredibly realistic 19-year-old, meaning her insights and motivations are filtered through her inexperience.  Teen heroines are unusual outside of YA fiction, and I found myself gravitating toward the more seasoned characters who appeared later in the story.

Blood Red contains moments of authentic grief: Rachel’s feelings for her father and for the other survivors she eventually meets are truly poignant. The story delves into the complex nature of rescue instincts when faced with beings that are no longer salvageable; the triage scenes illuminate the ethical dilemmas that accompany life in a post-apocalypse. There is enough action and description of gore to hook horror fans.  I believe that Bovberg will have a strong following for Book 2 and I recommend Book 1 for fans of the zombie genre, apocalyptic fiction, and post-apocalyptic dystopias.