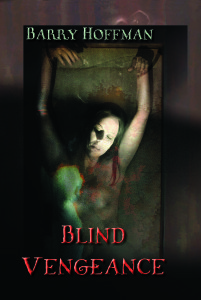 Blind Vengeance is the fifth book in the Eyes series and continues the life and tribulations of Shara, the multifaceted bounty hunter whom fans of the saga can’t seem to get enough of, and for very good reason.

The story begins when Shara’s bounty hunting partner Briggs gets accepted back to the police force after a controversial leave of absence.  Though sad to see him go, it was business as usual for Shara who soon had a new side-kick, Cheyenne, the tough-go-lucky love interest of a well trusted friend.  Life went back to relative normal until a man whom Briggs had years ago wrongfully arrested; decided Briggs didn’t deserve a second chance.  The life of Norman Flowers had fallen apart because of Briggs and now it was payback time.  Kidnapping a girl he thinks is the cop’s daughter, whom Shara happens to be the legal guardian of, is hardly a scratch on the surface of what the obsessed Flowers has planned.  Once more teaming up with Brigg’s, every clue Shara hunts down is another dead end.  She suspects there’s something far deeper and more sinister going on than meets the eye.  Despite frightening images that flood her brain during frequent fever dreams, despite the aid of her confident, Renee who has abilities she tries to keep hidden, and despite an over ambitious FBI agent hell bent on throwing Shara’s career under a bus, Shara refuses to stop at nothing to capture her prey at all costs while protecting an innocent girl’s life who’s time is fast running out.

Naturally, the usual burning question for any literary sequel is whether or not if reading those that came first be required reading before fully enjoying this one.  Rest assured, Blind Vengeance stands out solidly on its own merit.  .Although I did occasionally feel some of the inner narrative could have been trimmed down a touch for an even greater sense of mystery and suspense.  It really boils down to opinion as mileage varies with every reader.  On the other hand, I considered Barry’s ambitious delve into the psyche of his characters to be a fascinating glimpse into how thin a line it truly is between unflinching reckless and protecting what you love.  The overall dialogue was smart and gritty while carrying a sharp sense of realism which uniquely represents each of the personalities along the way.

With a finger planted firmly on the pulse of our ever changing social landscape, Barry’s knack for fleshing out complexities of the human spirit, both heroic and villainous with all the greys in between, is nothing short of profound. The result is an organic creation which refuses to rely on the conveniences of logic-suspending loopholes.   And of course, it wouldn’t be right to conclude this review without also mentioning the stunning cover art of Harry O’ Morris who never fails to capture the wondering eye, just as Barry never fails to deliver a resonating thriller which begs to be contemplated well after reading.