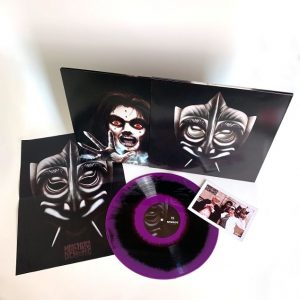 Italian label Spikerot Records has given a very rare and very cool gift to horror fans. This summer, they released the original Italian score to Mario Bava’s La Maschera Del Demonio which is, perhaps, better known to North American fans as Black Sunday. This is the first time Roberto Nicolosi’s music for the film has been issued in its entirety on vinyl.

Twenty unreleased tracks, with liner notes by Lamberto Bava (Mario’s son and an influential director in his own right), and gorgeous artwork make for an impressive addition to any horror fan’s collection. And, as far as soundtrack releases in 2019, I’d rank Spikerot’s La Maschera Del Demonio right up there with Waxwork Records’ pressing of the score to 1968’s Night of the Living Dead. In many ways, these historic releases complement each other as bookends to a decade that pushed horror into new and exciting directions. To quote the liner notes, Bava’s film was not the first Italian horror film, but “the first to create one according to our modern standards: popular but psychological, visionary and a bit naughty.” Though Lamberto is speaking of the film, in general, I think the quote works simultaneously as a commentary on the expressive score.

And the record sounds spectacular! All the music was remastered for this release, using the original masters, and the quality of the remaster shines through over every track. These pieces are crisp and clear and show no sign of being recorded nearly sixty years ago. Hats off to Carlo Altobelli’s work mastering this for vinyl. Nicolosi’s tempered and creepy compositions eschew the typical stings and bombast of more generic horror scores, sounding closer in tone to the works of Franz Waxman and Bernhard Kaun, who composed the music for Bride of Frankenstein and Frankenstein, respectively. Meditative, moody, and extremely gothic, Nicolosi’s score ought to be celebrated as a classic of the genre. Releases like this one will hopefully help raise awareness of the Italian maestro’s contribution to film and to the horror genre, in particular.

The score is cut at 45rpm and pressed on 180g audiophile vinyl. The gatefold sleeve is housed in a die-cut slip-case, with stunning artwork courtesy of SoloMacello, featuring beautifully rendered scenes taken directly from the film. The iconic “mask” worn by Barbara Steele adorns the cover to both versions of this very limited release: 500 copies of La Maschera Del Demonio will be made available; 400 of these are called Katia’s Curse and are pressed on a bone white vinyl; 100 copies, Asa’s Revenge, are pressed on a purple and black vinyl and are a Spikerot exclusive.

This is a no-brainer purchase for horror aficionados and collectors alike. With Halloween right around the corner, Nicolosi’s score is a perfect holiday backdrop. And for creatives looking for spooky inspiration, give this gothic masterpiece a spin. You will not be disappointed.

Buy direct from the label: https://www.spikerot.com/shop/888-566-la-maschera-del-demonio-black-sunday-original-soundtrack-lp.html#product-details

*Special thanks to Davide Straccione and Spikerot Records for providing a copy of the score for this review.