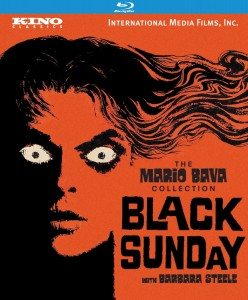 When it comes to Italian horror, there are certain names the loom higher than the rest. Dario Argento, Lucio Fulci, and one that preceded both of them, Mario Bava. All three have their strengths, but for me, Bava had the eye for camera use. Whether it is in glorious color, or in moody, beautiful black and white, every scene in a Bava movie looks amazing, like a meticulously staged photograph, only thousands of them, all lined up in a row. That’s probably because he started off as a cinematographer before he moved on to directing. When he finally moved on to directing feature films with this, his first credited, full-length directorial debut, he had already been making great looking movies for years. Black Sunday is a thing of beauty from start to finish, but does it have more going for it than good looks? Well grab your crucifix, beware of bats and witches, because we’re taking on the Devil with Black Sunday.

This film begins in 1630 with one of the most memorable witch-killings in cinema. No woman being burned at the steak here. Instead the beautiful witch has an iron mask with the inside studded with nails hammered on to her face. In 1960, when this movie was made, it just didn’t get any more shocking than that. Only after that do the frightened Russian peasants try to burn the body, but a sudden downpour stops the cookout before it can get started. They bury the witch instead. Big mistake.

Jump ahead two hundred years, and two doctors are traveling together when their carriage busts a wheel. Leaving the coachman to fix the problem, the two explore a nearby ruined chapel and inadvertently open the coffin to the witch, whose body is remarkably well preserved, minus the eyes. Next thing you know there’s a giant bat and then the vengeful witch is up and around and not in a very good mood. Thankfully for her she has a great, great, great niece (or something) that looks exactly like her, so she can possess and replace the woman. To help her do this, she even summons her vampire lover from beyond the grave. So begins the witches plan for revenge on the descendants of the people who nailed her (ha) so many years ago.

The story is kind of hit or miss here. While it’s not bad, it’s not all that original, not even for 1960. It does some surprisingly shocking things, such as the aforementioned masking, but the heart of the story is a traditional return from the grave revenge plot that has been a party of spooky stories since people started telling spooky stories. It is nice that everything takes place in Russia, and considering this was made in the 60s, that’s doubly surprising. What truly sells this film are the visuals. Mario Bava makes beautiful movies, and here, working with black and white, he shows that he is a master of light and shadow. It is simply a gorgeous movie to watch, and one that should be seen by every horror fan out there, even if the story is only so-so.

Sadly, as good as this film looks in this new HD transfer, the Blu-ray from Kino Classics is as bare bones as you can get when it comes to extras. There are only six trailers for various Bava movies on here. That’s all. While the most important thing is that this movie looks more beautiful than ever before, Black Sunday deserves more love than that.

Black Sunday isn’t my favorite Mario Bava movie, I’m more of a Twitch of the Death Never kind of guy, but it’s up there. It is a very good film and a virtual feast for the eyes. If you’ve never seen a Bava movie before, this is a good place to start. If you already experienced Mario Bava’s films, then you already know this is a must get to add to your collection. So this new Blu-ray of Black Sunday gets a high recommendation from me.