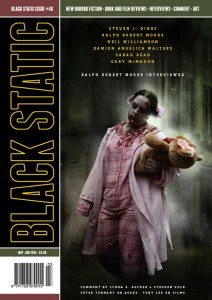 The lead articles in this issue got my brain a-bubbling, especially Volk’s article regarding what makes good horror in these times. He asserts that the best horror nowadays is not to be found in the commercial by-the-book horror movies with their predictably safe monsters and their cheap jump-out thrills. Instead, it’s found in movies outside the genre, terrifying in ways all too close to reality. And maybe he’s right: these days, if you want to truly be affected in a dark way, you need to go for those stories based on horror of the everyday. My only issue with this is: one, is this then really horror? (even Volk calls the films he gives as examples – like Nightcrawler – “not really horror”), and two, if you go to a monster movie for some form of escapism, fun and maybe a chill or two, then why the hell would you want to watch something so unnervingly realistic and traumatic that it leads to depression, even if it is more cutting edge? You might think to yourself, ‘if I want the horror of human existence, I’ll read the paper or stick my head out the window’ but it’s a craft – an art – and it’s true: the best of these not-horror tales will suck you in with sheer storytelling excellence and style.

This issue of Black Static has both kinds of horror: the psychological, barely supernatural kind, and the more traditional kind. Steven J. Dines, Damien Angelica Walters and Ralph Robert Moore (who is interviewed in this issue, and has many of his own opinions on what makes good horror) provide the first sort of tale and Neil Williamson, Gary McMahon and Sarah Read provide the other sort. Even though I consider myself mainly a supernatural traditionalist when it comes to the genre of “horror,” I have to say that Moore’s story of a man who gets lost in the woods and what finds him there dragged me right along, and willingly, to its bizarre and unsettling conclusion – it might even be my favorite of all the quality stories collected in this issue.

Rounding it all out as usual we have Peter Tennant with what’s new in fiction (and with the fascinating interview I mention above) and Tony Lee with his DVD/Blue-Ray recommendations and dissuasions.

Editor Andy Cox has done it again, bringing us another excellent issue of this essential horror magazine. Subscribe away.