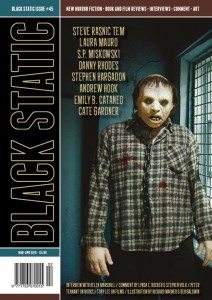 It’s no secret that Black Static is one of the top magazines in the field of horror and dark fiction. The current issue confirms once again the high quality of the material included, both fictional and non fictional. The fiction section provides stories by Andrew Hook, Cate Gardner, Emily B. Cataneo, Laura Mauro.

To me, however, the more accomplished tales are SP Miskowski’s interesting ” The Second Floor,” featuring a teacher returning to Seattle for a visit; “The Visitors” by Stephen Hargadon, an enticing journey into the world of British pubs; “The Fishing Hut” by Steve Rasnic Tem, an intriguing story about a disconcerting fishing expedition and “The Cleansing” by Danny Rhodes, a grim tale of urban horror.

In a perceptive interview, Peter Tennant portrays one of the very best new female genre writers, the talented Helen Marshall.

Tennant also reviews a bunch of dark fiction books, including the latest Ellen Datlow anthologies and some recent titles from the excellent Swan River Press. His incredible ability as a book reviewer is actually the main reason why I’ve been a subscriber to the magazine for a while, but also the reason why later I canceled my subscription. As a reviewer, Pete puts to shame anyone else’s commentaries and that, believe me, does hurt.