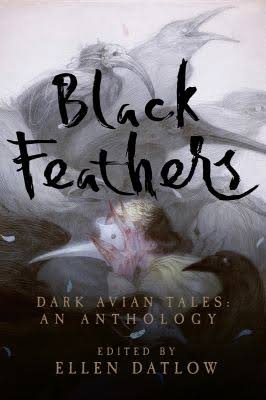 I was excited to see the first notices of Ellen Datlow’s Black Feathers—Dark Avian Tales. Any Datlow anthology is usually well worth reading; the lineup of writers is impressive; and I am immersed as it were in birds and birdlore through my work-in-progress, a collection of bird-inspired poems.

Reading the stories included justified my initial excitement. The book re-examines one of humanity’s closest companions, the birds we see and hear every day, the feathered creatures that are at once familiar and, when observed more closely, increasingly alien. It is an excellent selection of eeriness, darkness, fear, and terror, as characters discover that interest in things avian can lead to obsession, and that obsession can lead to unanticipated transformation, tragedy, and, all too often, death.

The anthology begins powerfully with Sandra Kasturi’s poem, “O Terrible Bird,” which encapsulates through rhythm and imagery much of the tenor of the tales to follow. Its point is simple: birds may be fearsome, but there is something far worse…infinitely more terrible.

Nicholas Royle’s “The Obscure Bird” follows one man’s fixation on the birds nesting in an area soon to be destroyed to make way for an unnecessary road extension. In particular, he develops an increasingly unhealthy interest in owls, Shakespeare’s “obscure bird,” that leads to the first frisson of terror in the anthology:

Andrew was standing in front of the sink staring out of the window. She took a step forwards and one of the wooden boards creaked. Andrew’s head started to turn.

And continued to turn. It turned through ninety degrees and kept turning. (9)

Simple statements, yet terrifying in their implications for Andrew, his wife, and both of their lives.

Seanan McGuire’s “The Mathematical Inevitability of Corvids” is among the strongest and strangest entries in Black Feathers as it meticulously (and appropriately) recreates the mental processes of a young girl, Brenda, whose obsession is that through counting crows, she in some arcane sense controls fate—certain numbers mean good things will happen; others lead invariably to evil. In essence she is convinced that her countings keep the world balanced…or will lead to its destruction.

Paul Tremblay’s “Something About Birds” moves from interview to narrative in the story of Benjamin Piotroskwi, published of a nascent fanzine, The Dark Review. After an interview with an older writer, he reveals more details than he should, drawn by the possibility of using the writer’s notoriety to bolster sales of his publication. In doing so he unknowingly puts himself into the precarious position of having to choose between “talons or beak,” options that move inescapably from the aesthetic to the physical.

Another particularly powerful tale, Joyce Carol Oates’ “Great Blue Heron,” follows a recent widow through her encounters with an insensitive, overly affectionate brother-in-law, well-meaning but equally insensitive friends and co-workers, even strangers who misinterpret her actions. Woven through the narrative are Claudia’s increasing awareness of, and focus on, a great blue heron in the nearby lake. As she struggles with loneliness and increasing isolation, her life concentrates on enduring intrusions, drawing nearer emotionally to the powerful figure of the heron, and understanding the implications of her hyper-realistic dreams of freedom in flight.

And so it goes, story after story bringing readers closer and closer to underlying possibilities inherent in birds, then revealing how dangerous such nearness brings. Richard Bowes’ “The Season of the Raptors” places the “carnivorous fledglings” of red-tailed hawk in an urban setting; and Allison Littlewood’s “The Orphan Bird” follows a loner, once bullied and tormented, and his interest in nesting bitterns.

Jeffrey Ford’s “The Murmurations of Vienna Von Drome” uses starlings and their exotic and mystic flights—murmurations—to solve a series of hideous murders; the next story, Mike O’Driscoll’s “Blyth’s Secret,” focuses on crows, in particular an apparently sentient pet that seems reveal clues to another murderer’s identity…and hold a deeper secret. Usman T. Malik’s “The Fortune of Sparrows” takes place in a girls’ orphanage, where the eponymous sparrows provide a means of fortune-telling.

After several more excellent stories (I’m running out of space), the anthology comes to a strong conclusion with Priya Sharma’s “The Crow Palace,” with its eerie conflation of images of crows and cuckoos, humans and not-quite-humans.

At the end, eerie is the word that best describes the sensation of reading Black Feathers. Eerie people, eerie situations, eerie landscapes, and most of all eerie birds to haunt imaginations and trouble dreams.
Highly recommended.