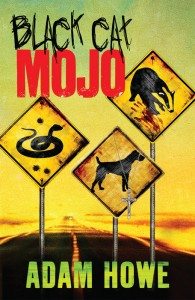 A popular, hopeful axiom would have us believe that we mostly ‘make our own luck.’ While it is true that often our luck makes us, it is also true that sometimes luck is so persistently bad that it becomes an almost pernicious disease. A dismal landscape where the road to redemption, if it exists at all, is spattered with flaming smears of hellhound excrement, strewn with jagged shards of razor-sharp metal and broken glass that must be crawled through to get to the other side of hope. Dark crime fiction doesn’t get much bleaker than this, and is explored in vivid, explicit detail (with a sneakily subversive jet black humor underlay) in Black Cat Mojo, a collection of three novellas and one short story by Adam Howe, published by Comet Press.

Jesus in a Dog’s Ass is a wildly irreverent (thanks, Captain Obvious) skewering of small town trailer park culture, religion, get rich quick Internet schemes and inept two-bit punks out to make a quick score with an outrageous, doomed-to-failure plan. Again, Howe combines greed-driven characters, madcap elements, and totally unlikely events toward a hilarious, if somewhat disgusting ending. The characters are cleverly and well-drawn, the dialog spot-on and funny, but the ending feels slightly abrupt and truncated.

The popular gangster mythos is blown up in Frank, The Snake & The Snake where we find former low-level mob functionary Frank ‘The Tin Man’ Piscopo toiling alone in a swampy, mosquito-ridden southwest Florida town, working as a mechanic under the auspices of the federal witness protection program. That is until Stevie Klein, a young petty crook with dreams bigger than his capacity for common sense, recognizes Frank and threatens to blow his cover. Frank is unwillingly drawn into Stevie’s foolhardy plan to accompany him on a drug pick-up from a fearsome dealer known as Ink, also a die-hard gangster aficionado. After a flashback detailing Frank’s brush with the real mob (the best six months of his life), his subsequent sell-out and immersion into WitSec, Frank and Stevie complete their harrowing meeting with the dangerous dealer called Ink. Tense twists and turns, double-crosses and gun-play ensue, along with a nail-biting encounter with the second of the ‘Snakes’. The tongue-in-cheek epilogue ties all the loose ends together, with a chilling finale.

The sole reprint, “The Mad Butcher of Plainfield’s Chariot of Death” is the most conventional of the lot, a well-realized period piece (1960’s) about a third-rate carny joined by one Bonaparte Gibbons, an opportunist who attempts to buy mass-murderer Edward Gein’s estate at auction in order to open ‘America’s Greatest Spook house,’ but only ends up with Gein’s rusted old ‘49 Ford sedan. Unfortunately for Gibbons, he is a few decades early to cash in on America’s obsessive fixation with serial killers and their grisly crimes, despite the success of Hitchcock’s Psycho, based on the Gein atrocities, and he is relegated to the fringes in a lurid tent show. Although well-written and certainly evocative of the era, this story seems slightly out of place alongside the others. With a mostly predicable set-up and ending, by comparison, it is the weakest of the collection.

Comet Press continues to impress with a high quality product, boasting a simple, logical lay-out, comfortable to read typeface, well-edited and proofed text. Personally, I could live without the use of all caps, and use of italics seemed inconsistent, but those are minor quibbles.

Adam Howe won an On Writing Stephen King judged fiction contest, and has had his short fiction published in a variety of small press venues. With this collection, Howe exhibits a firm grasp on the complexities and history of dark crime fiction, as well as an obvious affection and passion for the genre. His influences are diverse and sometimes obvious, but he manages to successfully meld them into a voice that’s uniquely his. Despite the often brutally graphic and sexually explicit nature of his work, he consistently breathes a painfully human aura into his characters and even though he initially sets some of them up as caricatures, Howe cleverly uses dialog and shifting third person POV to put the reader into the uncomfortably slimy skins of his sorry troupe. Howe’s prose has a snappy, in-your-face nouveau noir feel to it, his graphic depictions sometimes stomach-churning and relentless, yet always with a blackly comic undercurrent. Occasionally, his prose drifts close to self-indulgent, ‘see what I did there?’ territory, but he stays mostly on course with his storytelling technique. Howe weaves a deeply stained tapestry of ne’er-do-wells and addicts, schemers and dreamers, gangsters and wannabes—a nihilist’s seriocomic wet dream, an absurdist’s cartoon shaded with smears of semen, blood and excrement, a scathingly satirical send-up of popular culture and the decadent human condition in general.

Technical praise aside, this collection will obviously not be for everyone. There’s violence and gore aplenty, explicit, twisted sexuality, and characters that, on the surface, seem unworthy of empathy or redemption. The humor is darkly outrageous and suffused with snarky irreverence. The queasy or easily offended need not apply. That said, there’s a lot to like in this quirky, fast-moving collection by a very promising talent.

If you don’t mind getting a little dirty.