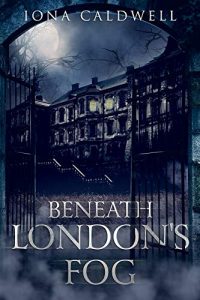 The narrator of the novel BENEATH LONDON’S FOG by author Iona Caldwell makes it known on the first page that they are not the hero of this novel, but rather a villain. This villain is the immortal Jonathan Holloway who resides as the master of Raven Hollow Manor in London. Although the term vampire is never directly used to describe him, it is clear that he suffers from all the things that immortal living brings about.

Probably the most depressing trait of immortality is seeing people and things that you may have feelings for disappear or die away, as you continue to exist with no power to change this from occurring. The novel begins in the year 1910 and Jonathan is concerned about a brutal string of murders in the London area. He also is quite possessive of the one he refers to as his own daughter – one-time street urchin, Holly. As much as he is able to do for Holly, he still recognizes that deep-down she will always see him as a monster.

A London detective named Walter Deverough seeks out Jonathan Holloway one evening at Raven Hollow Manor. He has two reasons for being there: the first is to officially ask for Jonathan’s help with ending the current murder spree, and the second is to let it be known that he has become romantically involved with Holly and wants her hand. As Jonathan lends his involvement to the case he begins to see shocking similarities with the “work” of someone he knew centuries earlier.

Iona Caldwell treats readers to various flashbacks, some going back as far as the 1500s. It is during that time that Jonathan lost his love, Annabelle, someone he has vowed to avenge. As the case continues and the murders begin to pile up, Jonathan is torn at learning his initial fears were accurate. The one behind these murders is none other than Catalina, the same immortal who claimed his Anna or Annabelle.

Jonathan must now find Catalina for the inevitable showdown that was long overdue, but will he be able to do that and keep his Holly safe at the same time? It is a complex situation made worse by the fact that Jonathan and Catalina had been one-time been lovers, and we all know the old adage about a woman scorned.

This is a terrific, quick read and I only wish BENEATH LONDON’S FOG had been longer. At barely over 100 pages, this novel leaves the reader wanting more, and I can only hope Iona Caldwell is prepared to give that to us sometime in the near future.