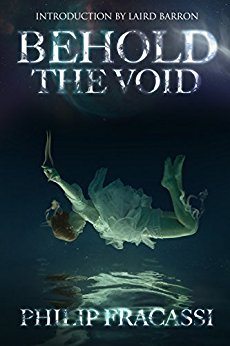 To say I had high expectations when I heard that Philip Fracassi had a new collection being published would be an understatement. Having previously read a spare few of his books, I have a great love of his stories and his glowing, poetic prose. It’s hard to believe that just last year he was a new discovery for me. I’ve become so enamored of his often disconcerting stories, his words like unquiet old friends I’ve visited time and time again. And the reason for that, quite simply, is that Fracassi is brilliant and his work is insidiously memorable. His language is gorgeous, the tales he weaves enthralling and, because of that, I’ve sought out and read everything I can find by him, including the incredible stories, “Altar” and “Mother,” both of which are included in this collection that I’m ramping up to start raving about.

In the first story, “The Soft Construction of a Sunset,” you learn very quickly what you’re in for with this entire collection. Here we meet a man with a remarkable yet unsettling ability and a desire to find perfect love. It’s where you discover Philip Fracassi’s incredible alacrity with the written word, and where you first experience his exemplary ability to turn a phrase, his language as mesmerizing as his stories. I’ve said it before but it’s worth repeating the fact that his prose has a tendency to leave me awestruck and in Behold the Void it won’t take you long to discover why:

Cold air prickles his neck and he opens his eyes, sees the sun has almost set; the horizon of her sinks into shadow, ready to sleep. She bleeds into the night, her essence coating the dark heavens. He lies on the blanket, joining her as part of the dark, and feels her stars rush into his nose and mouth, filling him.

I sometimes get so caught up in the pure precision poetry of his prose that I have to take a minute to pick back up on the context of what I was reading.

Behold the Void contains an eclectic gathering of very long, almost novella-length stories interspersed with shorter works. And while those longer tales tend to take center stage, their smaller counterparts aren’t without merit. In fact they’re drenched in it. In addition to “The Soft Construction of a Sunset” there are some absolute gems in this tome with some major high points. In “The Horse Thief,” the protagonist, Gabino, steals a horse and weirdness ensues post-haste. You’ll finish the tale wondering, “Did I really just read a noir, ghost, splatter, body-horror story?” And that’s the thing about Fracassi’s work. While it’s obviously horror, it defies categorization at every turn, with frequent forays into the cosmic end of the pool, but also into more traditional forms. But there’s nothing traditional or conventional about the themes in Philip’s writing. One of the most outstanding tales I found in the book was “Coffin,” a story that ponders death and Nature, beginnings and ends, and does so in an increasingly disturbing fashion:

Sylvia had just turned sixteen, and already she could feel her own growth slowing to a grinding, creaking halt. Her bones increasingly stagnant within layers of earthy flesh and muscle that would soon begin to degenerate, the microcosmic ballet of cells becoming clumsy as each fleeting day, each passing second, the feet of the dancers falter and stumble evermore; the once-vibrant performers drying up, flaking, falling and dying upon the great stage of her body, whisking it away toward its dusty end, toward the smell of flowers, toward the final curtain of death.

Fracassi deals in unrelenting despair, often as sharp, vivid, and excruciating as a root canal without Novocain and there’s not a story in this book that’s likely to leave you untouched in some way. Few authors working today have his descriptive prowess or ability to set a mood that both haunts and enraptures his readers.

It might seem from how I’ve raved about this book so far that I’ve already told you about the best parts of it. And that’s one of the things that makes it so great. Because I haven’t even touched on the most precious gems yet. In Behold the Void, Philip Fracassi has penned some of the best stories I’ve read in a long time and cemented an already assured fan for life, sealing the deal with these next few stories I want to talk about. I think the best stories I’ve read by him are the ones that range from novelette to novella  length. He seems to be most comfortable within those bounds and his stories really shine, giving him the room to really demonstrate what he’s best at. It’s just about impossible to narrow down the best attributes of Fracassi’s writing but I’ll touch on some of the things that make it really work for me.

Philip has an amazing knack for evoking sense, making you experience what his characters touch, taste, and smell, the ocean spray on your skin, the tang of mustard on a processed ham sandwich or, as in this this passage from “Altar,” the hot sun on your skin:

To make things worse, Gary wore nothing but a swimsuit, and the sun coming through the large wagon windows was sliding across his skin in slanted white quadrangles, smearing like hot butter across his small frame with every twist of the road. He felt like a bug trapped under the concentrated bright eye of a magnifying glass.

With that passage we can almost feel what his character is feeling, and as the story progresses he ramps up the tension and holds his reader captive with multiple layers of conflict, immersed so deeply in the story it approaches sensory overload after awhile.

In “Mother,” as well as every other story in the collection, Fracassi demonstrates how masterfully he can develop characters without using a ton of unneeded expository history to fill in the blanks, instead using combinations of action, setting, and dialogue to let us make our own inferences and get to know his actors through their interactions and our own intuition. He gives us just enough backstory to learn a spare bit about the two main characters and then lets them run with the story from there, making the people real and believable and the pacing amazing. This story, as it nears its end, is one of the most terrifying stories in the book and worth the price of admission all by itself.

With the final tale in the book, “Mandala,” we discover just exactly what terms like “edge of your seat” or “nail-biter” really mean as we follow two young boys, Joe and Mike, as they set out to play cops and robbers on a hot summer day. The premise is mundane enough, but Philip Fracassi knows that the way to the heart of literary terror is through suspense and dread and he ramps it up here in unprecedented fashion for this collection. His language—gorgeous as it is—can be deceiving, but there’s no questioning the fact that he’s setting you up for stomach-twisting horror:

And the water wasn’t blue and clear like in Los Angeles. It was green, dark, and very cold. And the seaweed limbs were big. Flowing, writhing things lying just beneath the surface of the water, and when you swam those leafy limbs reached up at you with wiggling arms, brushed against you and sometimes (Mike could have sworn it had happened more than once) they grabbed at you. Wrapped around your legs or ankles and held tight, making you twist and pull to free yourself.

Coming back around to the high expectations I mentioned at the start of this review, I have to say that, if anything, Behold the Void far exceeded them. Every story in here is golden, the narratives laid out with perfect prose and some of the best storytelling and characterizations I’ve seen in contemporary literary horror. If the Brothers Grimm were writing today, they might pen such a tome as this, at least as far as originality and creativity go. That’s how fresh and original the imagination of Philip Fracassi is. There have been several indie authors popping up on my radar lately who are writing big-league genre fiction, and Fracassi’s one of the best of them. I highly recommend him and this incredible collection, and I recommend acquiring and reading his words as soon as you possibly can.

NOTE: While Hellnotes is a Journalstone publication, my opinions are my own and are in no way influenced by them.