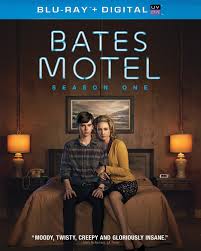 When I first heard about this new TV show, I have to admit that I had mixed feelings about it. I love the original novel and movie, Psycho. I even like some of the sequels to different degrees. That goes for both the books and films. So I’m a bit of a fanboy for the ultimate momma’s boy, Norman Bates.  So a TV show about it? Sure, that could be fun. Maybe. But then I heard that it will be set in the modern day. With a modern and teenage Norman. Who had an older brother. The small town where the Bates Motel is found would have its own dark secrets. And the show would deal with love triangles for both mother and son. And…does this all sound a bit overdone to anyone else? But with as much as an open mind as I could muster, I sat down to watch this new Blu-ray set from Universal of that show’s first season.

And you know what, it wasn’t half bad. It also didn’t really have a lot to do with the Psycho I knew and loved or even really have that Psycho vibe, to be honest. But does that mean it’s bad or is it just doing its own thing? Well grab a wig, a big knife, and an old lady’s dress because…oh wait. Check that. None of that really fits in this version or Norman and his mommy. Well whatever, we’ve got reservations at the Bates Motel, so let’s get going.

Bates Motel is playing the long game here, by which I mean the first season had 10 one-hour episodes (that’s with commercials) that it had to fill with something. That means there’s a lot more to it than just the story of a psycho and his mother issues, but that’s only natural when something jumps from the big to the little screen. However, often times there’s almost too much going on, to the point where I often found myself saying, “Oh come on now.” For example: Bates Motel concerns itself with a high school Norman and his mom, Norma, the suspicious death of Norman’s dad at the start of the series, a prodigal step-brother returning unannounced, Norman in a love triangle at school, Norman’s various other school day problems, Norma in a relationship, that relationship having unforeseen dangers to the mother and her son, and unexpected murder early on, all the police procedural business that comes with an unexpected murder, everyone in town seeming to have deep dark secrets, a surprisingly high amount of homicides for such a small, little town, many of those murders surprisingly having nothing to do with the Bates family, a sheriff out to get Norma, a deputy out to save Norma, a huge drug dealing empire, a sex slavery ring, and on and on it goes. It almost feels like “…and the kitchen sink too!” sort of storytelling and really, if half of those plot points were dropped and more focus was paid to the remaining ones, I think the series would have been made all the stronger for it.

That being said, there is some compelling television going on here. While some things are needlessly over complicated, there are some developments that hook you and make you want to see what happens next, and that’s pure gold for episodic television. Additionally, the acting across the board is very good. The two stars, Vera Farmiga as mother Norma and Freddie Highmore as psycho son Norman really nail their parts. Vera brings a bit of a MILF quality to her role that I wasn’t expecting. Well, other than Norman feeling that way, that is.  As for Mr. Highmore, it has to be scary as hell taking on such an iconic roll and just knowing that everything you do is going to be compared to the only person who ever owned the role of Norman Bates (yeah, sorry Vince Vaughn), the one and only Anthony Perkins. Well Freddie Highmore does that famous character proud. The supporting cast is top notch too. Olivia Cooke as Norman’s love interest number one, Emma, is just amazing in every scene she’s in. Max Thieriot brings much needed depth and dimension to what could have been a very one-note portrayal of Norma’s rather unwanted first son from another mirage, Dylan. In fact, there was no one in this show that I thought didn’t do at least an OK job, with many of them knocking it out of the park.

The new Blu-ray from Universal looks great, but only comes with a few extras. Well, initially, but more on that in a second. On the actual disc are a couple of deleted scenes and then a video of a discussion panel from the Paley Center with the cast and crew. And well, that’s it…basically. There is also some online passcode thing where you can get sketches from a notebook and “over 1 hour of exclusive bonus features” but I don’t know what any of them are because I hated how they were utilized here and so I didn’t bother with them. First, I despise needlessly having to jump through hoops and that’s exactly what this felt like to me. Second, it says “limited time only” and that really burned my butt. I don’t care if I buy your Blu-ray set now, or a year from now, if I pay my cold hard cash for something, I better get all of it, and not have some parts no long available because I didn’t purchase it on your timetable. Hey, Universal next time just put it all on the damn discs, and to the marketing whiz kid that came up with this idea, way to be a jerk-ass.

Stupid Blu-ray gimmicks aside, I did end up liking Bates Motel much more than I thought I would. For every bit they needlessly added that had me rolling my eyes, there was more parts that had me intrigued enough to keep watching. That and the overall very fine acting means I give Bates Motel Season One a solid recommendation for fans of the original Psycho books and films and even neophytes who never knew the classic work of Robert Bloch and Alfred Hitchcock.