Ballads to the Burning Twins: The Complete Song Lyrics of the Deathray Bradburys – Book Review 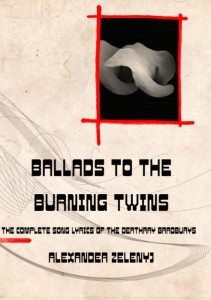 Poetry is a bit of a lost art in the modern world, but there are still poets out there challenging, inspiring, and, in the case of the dark poets, frightening us as well. Alexander Zelenyj’s poetry collection, Ballads to the Burning Twins: The Complete Song Lyrics of the Deathray Bradburys, has an unusual conceit with the potential to either fail spectacularly or succeed dramatically. In Zelenyj’s case, he makes it work wonderfully.

The premise of the collection centers on a band, its material, its fans, and a heavy dose of the supernatural. The Deathray Bradburys were a somewhat popular, short-lived band from the 1990s. Zelenyj’s poetry comes in the form of song lyrics from the band. They are cryptic, dark, and compelling. Lines such as “Where did the Essex women go?/ Summoned like the tides by the moon” hint at the mysterious disappearance of the band and hundreds of fans. Gothic tones haunt the work here, and line like “But they’ll die too/ and we will live after them” suggest vampirism and its dark promise of immortality. The lyrics are punctuated by macabre and often inexplicable images that draw up 90s memories such as Nine Inch Nails’ groundbreaking video “Closer.” While the “band” concept is intriguing enough, the lyric portion of Ballads works beautifully as stand-alone poetry as well.

Zelenyj does a fantastic job of creating an entirely believable story about the Deathray Bradurys. Taking their name from a Ray Bradbury quote, the band is surrounded by legend, lies, and mystery. It’s like a treasure hunt digging through the lyrics to find hints of the horrors to come when the band and its fans vanish. This is the kind of rock scandal we all wish for at least once in our lifetime. Personally, it matters not in the least that it’s fiction. I would love to hear the music, but until then, Ballads to the Burning Twins: The Complete Song Lyrics of the Deathray Bradburys is one heck of a read.