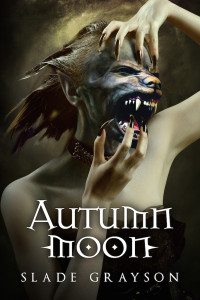 Ok, folks…I have your next Must Read Book of 2014! Autumn Moon by Slade Grayson is an amazing read, and it’s probably the best werewolf novel I’ve ever read. Yes, that is a bold statement to make, especially when you consider I’ve been reading horror for 30 years. But this book has it all:  the story is unique and very original, the prose is solid, the characters are flawed and believable, the werewolves are primal and bloodthirsty…you just can’t ask for much more from a horror novel.

If you are not familiar with Autumn Moon, here is the plot synopsis courtesy of Permuted Press:

Tanneheuk, Montana appears to be an idyllic small town. There’s no crime, no poverty, and no racism. The town is overseen by a small group known as “the elders,” a tribe of people who have watched over Tanneheuk for hundreds of years. The elders are shapeshifters – werewolves – and they protect the townspeople from the corrupting influence of outsiders. In return for their protection, they only require one thing: Every year, on the first day of Autumn, they want to hunt a human… Drake Burroughs is a young minister with a checkered past. Newly assigned to the Tanneheuk Church, he knows there’s something dark going on beneath the surface of the seemingly perfect little town. When he discovers the truth about the elders, he convinces the townspeople that the hunt is a sin against God, and they should break their pact with the werewolves. Roman is the Alpha Wolf, the leader of the elders, struggling to keep his pack together and his leadership unquestioned. Roman knows the annual hunt is archaic, but also understands the importance of tradition for a race of beings who live on the cusp of extinction. But the growing dissension between the townspeople and his pack is not the only reason to cause Roman to hate Drake Burroughs: Diana, Roman’s sister, is sexually drawn to the new minister, and is willing to do anything to act on it. Even kill, if necessary. Added to this volatile mix is a family of con artists hiding out in Tanneheuk; a female pot-smoking deputy, torn between her unrequited love for one man and her burgeoning desire for another; a young girl training for the annual hunt, determined to be the next chosen; a restored 1970 Dodge Charger; Karaoke night; lots and lots of guns… It might Judgment Day for Tanneheuk.

There are simply so many things to like about this book. One major aspect that immediately jumps to mind is the cover artwork.  As you can see from the image above, it is definitely an attention-grabber. If a reader had any doubts at all about purchasing the book before seeing it, those doubts would immediately be washed away after eyeing this imaginative picture.

As for the story itself, Grayson writes with a fluid manner that broadcasts each scene into your mind as if it was coming straight from a movie. As such, the story unfolds in vivid detail, however the reader is not constantly bogged down with exaggerated detail. This allows the reader full immersion into the story, and it presents are more viable, realistic reading experience.

The characters in Autumn Moon are all damaged in one way or another, which makes them believable and (for the most part) likable. Obviously, there are a few who you immediately want to die off, but that’s common in many books. I particularly like the preacher, Drake. Although he is a man of God, he shows the reader that Godly men are also human, who fall and fail just like the rest of us. I will not give anything way, but I like how happens to him at the end. It is very fitting, and it made me smile.

The werewolves, er, ‘shapeshifters’ as they preferred to be called, are very much like what I always pictured them to be: tribal in nature, living on the outskirts of society, and keeping to themselves for the most part…but very territorial and aggressive. Roman, their leader, is the perfect Alpha male: a semi-egotistical fascist with a God complex. As things unravel, he certainly puts the ‘bad’ in bad guy!

Autumn Moon is a big win for me, and I highly recommend giving it a look. It is a very entertaining read, rife with originality and high-octane action. Make a note to put this on your To Read list soon. It is available now in a variety of formats.