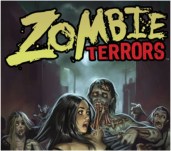 Zombie Terrors – a giant flesh rotting collection of all-new zombie tales. Featuring an international cast of artistic talent. Szymon Kudranski (Spawn) brings us “The Barber,” a tale of the undead and the Mob. Dwayne Harris unearths zombies from 1776 in “Deadcoats.” In “Creature Converts,” a cat lady’s feline friends develop a taste for the flesh. In “Feast” a gangster’s taste for a delicacy becomes his end. In “Hate” a zombie must confront what he’s become. Billy George brings us “The Undead Templars” a tale of the blind dead. Featuring an all-new tale by horror master Tim Vigil. In “The Jiang Shi” we get a taste of Asian zombies. Robert S. Rhine and Nenad Gucunja brings us “Mr. Dead,” and Frank Forte delivers “Beheaded.” Other tales include “Bond,” “Dead of Night,” and “Zombie Evolution.” Special 24-page preview of upcoming Ogn Undead Evil by Frank Forte and Nenad Gucunja. Pin-ups by David Hartman, Jason Edmiston and Doug Williams. Over 15 flesh-eating tales to shock and horrify 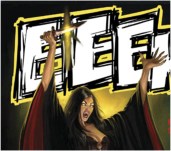 EEEK! – This retro-style anthology of all-new horror tales is guaranteed to give you the eeries and the creepies! Taking a pinch of black humor from EC comics and mixing it with the art stylings of House of Mystery and Warren comics, EEEK! blends a heady broth that hits you like a burning incense stick to the retina. Jason Paulos delivers the goods with over 15 tales of revenge, zombies, vampires, ghouls and monsters. Each tale drawn in a different style reminiscent of the B&W horror mags of the ’70’s and ’80’s. In “Deadline of Death” we witness rival comic artists dabbling with malevolent forces that arrive in the form of a chain smoking goatee wearing Satan. In Lights! Camera! Murder!, A lovesick starlet and a ruthless film director embark on a doomed love affair that ends in pieces! In “Easy Prey” A helpless girl, lost in the wilderness … but is she all that she seems? In “Head Trip” a hippie’s love for music goes horribly wrong. Other titles include “Confessions of a Thrill Killer,” “Like Son, Like Father,” “In Too Deep” and many more. Includes full color section and sketches.