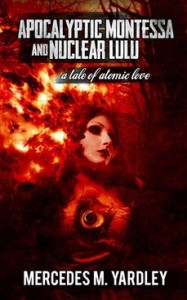 In previous reviews I’ve mentioned some writers whose works I’ve had the privilege of reading and reviewing who make it pretty much impossible to lavish anything but praise upon them because they are just that damn good. Mercedes M. Yardley can definitely be counted among that flock. She is without a doubt the most dynamic, innovative female writer of dark fiction I’ve encountered in recent memory with a brash, distinct voice all her own. While she’s been dubbed a female Joe Hill, the “female” qualifier irks me, as if it’s to say she’s good–but only for a female. It annoys me because she’s good, period. For those of you who have not yet read her collection of short stories released by Shock Totem last year, “Beautiful Sorrows”, you truly have no idea what you’re missing.

There is so much of Mercedes in this novella–so much of her essence that at times it can be overwhelming to the reader to share this kind of intimacy with the author, but it’s well worth it and makes “Apocalyptic Montessa” a fantastically memorable read. It’s my hope that this book will silence and satisfy those fantasy and horror readers who lament that no one is doing anything original anymore.

It wouldn’t be a Mercedes M. Yardley story if it didn’t start with a random woman wandering around in a graveyard, alone. She comes across a tombstone upon which is written the name “Montessa,” and she bestows the name upon the unborn baby growing inside her, which she’s sure is a girl.

Fast forward to when Montessa is all grown up and, as foreshadowed in the prelude to the present timeline, she’s not having an easy go of life. For one thing, she’s an exotic dancer who lives in Las Vegas and she’s awash in the constant doldrums of her daily life. Her boyfriend, Renan, is a complete jerk. She has every reason to be as depressed as she is, with no sight in end.

“She was a woman already dead, only her body hadn’t caught up with her soul yet.”

The above quote summarizes Montessa to a tee. There are hundreds, if not thousands, of people like this and it’s always sad to encounter them, but sadder still is only a few people can recognize this state in another person. From a stylistic perspective, Mercedes’s prose is notable for its inventive turns of phrase, and in this work, she has many.

Montessa wants someone to rescue her and spare her from the torment that she calls a life, and her answer comes in an unusual form. She has a stalker, Lu, who seems predatory and like he’s got a few screws loose from the get-go.

Lu kidnaps her, and through alternating viewpoints, we discover that this isn’t the first time Lu has made off with a woman, not to mention he’s a seasoned killer. At first, it seems that the reader will have to wait for the inevitable killing and subsequent fallout after Lu does his thing to Montessa, too, but things don’t turn out quite as you’d expect. Their interactions are funny in a way because she’s not the typical kidnapping victim, something which frustrates Lu to no end. She’s polite to her kidnapper. He has to coach her as to how to be a victim the way he wants her to act, because she’s not making this go the usual way it does.

Their relationship deviates even further from kidnapper/murderer-victim as the plot progresses, but unfortunately for Montessa, Renan is not too happy that she’s gone missing, and vows to find her, which only serves to add to the tension as the reader constantly wonders what will become of poor Montessa. This definitely isn’t your average cookie-cutter “Point A to Point B to Point C” type of straightforward, let-the-author-spoonfeed-you kind of plot. It doesn’t follow any traditional plot structure, and the unpredictability will keep you glued to the pages.

It doesn’t take long for Lu to become Nuclear Lulu, the significance of which you will see when Montessa gives him the apt moniker, as he really does seem to have a combustible personality and like he might explode at any given moment. He, in turn, dubs her Monty, which I found hilarious but also fitting. The relationship that develops between them is actually kind of sweet if you ignore the fact that he wanted to murder her.

But there’s a lot more to Montessa than meets the eye. She has a psychic ability that allows her to read people’s minds, but also enables her to sense their emotions, and it’s also suggested that she can send messages with her mind, especially to Lu, who also seems to share the same make-up as her given the passages in which he describes the rejection he suffered from his family, especially his father, for his nature.

Despite their newfound relationship, Lu can’t just turn off his need to kill. It’s a part of his inner programming and his internal makeup. But only Lu can make killing and murder sound tender, as funny as that sounds. When Montessa tells Lu that her soul was dead before she met Lu, it’s one of the most poignant revelations of the book. Unfortunately, as foretold at the beginning of the novella, things end in tragedy. Like any pairing of two star-crossed lovers who, at the start of the story seem like they’re mismatched but by the end realize they’re one and the same, two hearts beating as one, it can’t end any other way for these two. If it did, it wouldn’t be true to the story or to the characters. This is a tale of doomed adoration, and a tale of love, not of horror. Certainly there are horrific elements and bloody scenes, but it’s not a meaningless bloodbath.

If you enjoyed “Beautiful Sorrows,” then “Apocalyptic Montessa” is a natural follow-up, but even if you haven’t ever read the author’s work, you will enjoy this unique read. Keep your eyes and ears open, folks–Mercedes M. Yardley is only getting warmed up and with each new project, her star will glow and shine even brighter.