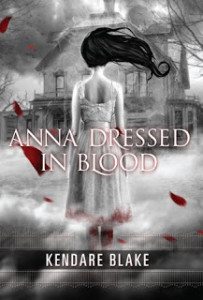 Athame in hand, Cass slices through the neck of the hitchhiker, black blood pours from his thick wound spewing over his vintage jacket, up over his face and into his eyes. He doesn’t scream as he shrivels up, and within a minute he disappears…

Cass Lowood hasn’t known anything in his life but killing things that are already dead. Coming from a long ancestry of ghost hunters, Cass has been given the power that very few have had the ability to wield, contained in the blade of his athame.  Since his father’s death, the weight has fallen upon his shoulders to continue the family tradition, sending him and his mother to the shadowed and sinister places that call for him.

However, the one thing Cass was not prepared for was the parchment paper letter with the blood etched name; Anna Korlov murdered 1958, and the horrors that would follow. Anna Dressed in Blood, is a horrifically violent local legend, notorious for dismembering and tearing the limbs from the 27 people who dared to cross the threshold of her house.

Once Cass’s eyes fall upon Anna, everything changes. She captivates him instantly with her midnight black hair suspended like it’s in water and her black pool eyes. She wears a white dress saturated in blood that drips along the floor boards as she approaches,  adding to the horror behind the legend.

Every bit of normalcy quickly falls out of place and Cass finds himself in a whirlwind that would be Anna. Finding himself suddenly surrounded by friends, Cass has to learn that this time, the power within him and his athame would not be enough. The power of Anna is one that is bound by deeper roots, where the only way to discover her true strength is to unleash the power that binds her, spinning Cass into a world he is not yet prepared for, and unlocking the dark recesses of what lies below tying Anna to her home.

Blood pours from the pages of this classic horror pooling up and staining the words red. Anna Dressed in Blood is as gorgeous as it is gory, bridging the gap of a grotesque horror and discovering the true meaning behind oneself.  Perfectly gripping as it hurdles you into the world of Anna, it spins you into the dark abyss that lays deep in the authors mind.

Kendare Blake, not only captures your heart with a truly mesmerizing story of a boy, a legend and discovering a love that was never meant to be.  Captivating you with writing that tangles you up in a blood soaked tale. Leaving you with the ultimate question, can a ghost have a soul?