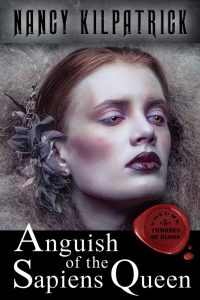 The books in the Thrones of Blood series typically start with introducing new characters. In Anguish of the Sapiens Queen, we become familiar with the titular Queen Liontyne. She is one tough cookie, as she must be: there is no one in her realm that she can truly trust. Not only is she always looking over her shoulder, she has grown weary of her life, her kingdom, and the people she rules. Kilpatrick writes, “When the silvery sliver of a moon rose to its zenith and a multitude of stars glittered like the diamonds in the crown she was compelled to wear, Liontyne had Ella prepare her bed early,” before describing the tedious opulence of her life. The Queen is surrounded by extravagance and beauty, and she herself is very beautiful, but she has nothing—or no one—to satisfy her. She is especially in no mood for a visit from the undead King Hades, who wants to speak to her about the dreaded virus we read about in Book 4. She is disgusted by this Vampir, but also seems to enjoy toying with him. It is a matter of survival that the two learn to communicate, but Liontyne is from Venus, while Hades is from Mars.

We reconnect with our old friends from the Alliance, and it is striking how many Vampir/Sapiens couples have successfully forged the gap between their two worlds. It provides hope for Liontyne and Hades, yet Kilpatrick successfully teases the reader with the conflicts between them. In addition to this tension, Queen Guin must choose between her throne and her life with her children. She and Necros still have moments of walking on eggshells around each other (most often it is Guin doing the tiptoeing) while their relationship continues to evolve, until the unexpected happens, leading to dire consequences.

The aspect of vampire mythology explored in Book 5 is the vampire fear of fire. I don’t want to give anything away, but this is handled with a magnificent outcome. I had no idea how the fire issue would play out, and was thrilled with how expertly Kilpatrick wove it into the climax.

As I have stated before, these books can be read separately, but I wouldn’t recommend it, as you would lose the panoramic view of this edgy and intriguing world. I am anxiously awaiting Book 6!