Angels of the Silences – Book Review 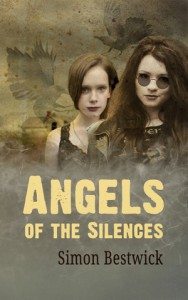 Emily and Biff are seventeen and best friends. They have been dead for nine months.

Don’t let this short-but-sweet synopsis fool you – there’s so much more that happens within the 90 or so pages of Simon Bestwick’s Angels of the Silences that’s well worth your time.

Told through Emily’s POV, readers catch up with Em and Biff when they’re already a few months gone. Yet for one reason or another, the girls remain earth-bound in their normal bodies and are able to carry on with their lives like nothing has happened. The story weaves its way through some of their teenage life but mainly focuses on their deaths – how it all came to be, and what they choose to do about it.

The strongest element of the novella is the bond between Em and Biff. Both love each other dearly, and with similar strong personalities, they go about coming to terms with their demises both together and apart. They eventually resolve to do some good from their deaths, and their bond is only strengthened by the time the conclusion rolls around.

Because the story is told from a teenage British girls’ point of view, most of the slang used is super British and may be a little hard for the non-Brits to decipher (I don’t know what a sausage buttie is, but it sounds delicious), but overall, Emily and Biff’s voices resound louder than any other character in the novella. Bestwick’s use of staccato prose works best under the guise of a melancholic teenage personality; it’s swift and to the point.

Bestwick’s talent for capturing the distinct voices of his protagonists is what sets this novella apart from others with a similar plot. Wrapping up in a quick but solid conclusion, Angels of the Silences will leave a lasting impression on any reader lucky enough to cross its path.