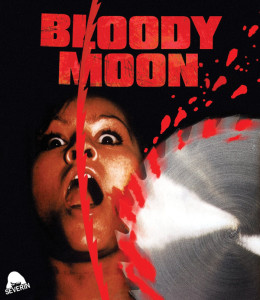 Bloody Moon is film that has pretty much been forgotten over the years by all but the most hardcore horror fan. A weird movie in many respects, and directed by the cult fan favorite Jess Franco, it does deserve better. Is it great cinema? No, but it is fun. Is that enough of a reason for you to get this new Blu-ray? Well keep reading and let’s find out.

One night at a masquerade party, Miguel, a disfigured young man, slips on a Mickey Mouse mask and attacks and kills a young woman. This sends Miguel to the asylum, but he’s released after just five years to the care of his sister, Manuela. She takes her brother home to their wheelchair bound mother, where the family now runs a boarding school for international young women to learn different languages. Hmmm, whatever could go wrong with that? Well with all these European cuties around, poor playdough-faced Miguel – no, really, that’s what his (scars? Wicked birthmark? I don’t think it’s ever explained) looks like – gets all hot and bothered, so he tries to hook up with his sister…again. Ewwww. And she says no, but only because there are too many people around. If they would all go away, then maybe they could have some brother and sister sexy time. Ewwww, again. So before you know it, the schoolgirls are getting butchered in all sorts of creative ways.

Now it is painfully obvious who the film is trying to finger for the murderer, but this movie is a blend of slasher bloodbath and giallo sex-murder-mystery, so there is more than just one possible candidate for who is maniac on the loose. My favorite was the comically “slow” handyman, who is always mugging for the camera when he’s not peeping on the girls, but even he is too obvious to put any serious money on.

Bloody Moon is an odd duck of a fright flick. Loaded with nudity, some intentional humor, even more unintentional humor, an awesome disco scene, far too much time spent watching girls wear headphones and learn Spanish, a woman bouncing on a bed and moaning to fool others that she’s having sex, and more than a few memorable kills. One woman is stabbed in the back and the knife blade comes out of her nipple. Another girl is tied up in quarry’s stone-cutting shack, which she thinks is all for some kinky sexy fun, and then fed to a large buzz saw right out of some cartoon. A boy gets run over by a Mercedes, and on and on it goes. There’s even a near miss murder by a giant Styrofoam bolder. And naturally, there’s our lead girl who keeps finding dead people, and knows that Miguel is stalking her, but never has any proof when she sounds the alarm, and starts to even question her own sanity. All the while the body count continues to rise.

Now to start things off in talking about this new Blu-ray from Severin Films, let’s begin with its excellent looking transfer. The last time I saw this movie, it was in pretty bad shape, but here everything is crisp, clean, and bright. As for extras, there aren’t that many on here, but there is and 18 minute interview with Jess Franco about Bloody Moon, so that’s something. Other than that, there’s the trailer and, well, that’s it.

As I have said numerous times in this review, Bloody Moon is a weird blend of giallo and slasher, drizzled with a healthy dose of Euro-sleaze. Fans of any of those genres may get a kick out of this one, especially if you don’t take things too seriously and can enjoy some silly with your slashing. I still found myself smiling while watching this movie after not seeing it for decades, so consider it recommended.