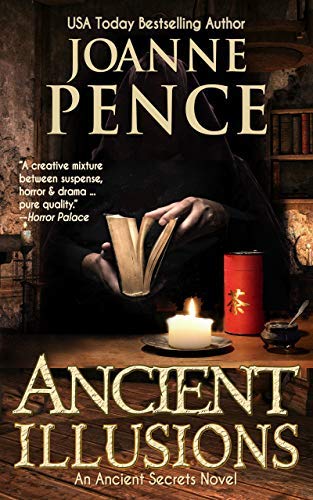 Archeologist Michael Rempart first appeared in Joanne Pence’s Ancient Echoes (2013), with an investigation into the disappearance of a small group of scientists studying the great Idaho batholith—an enormous granitic area in the middle of the state, largely uninhabited, with few roads leading in or out.

In Ancient Shadows (2015), Rempart receives an artifact, a pearl, purported to have been the source of Genghis Khan’s military might. He discovers that it is in truth an even more powerful artifact, a philosopher’s stone. Coveted for centuries by alchemists for its ability to transform whatever it operates upon into a higher form—base metal into gold, impure into pure, mortal into immortal—the stone contains not only great power but also, as Rempart soon realizes, an infinitely greater danger in the form of demons constrained within it.

Now, in Ancient Illusions, he returns in a new adventure, a quest to further unravel the mystery of the pearl and its role in his life and the lives of those he knows. To do so he must confront his enigmatic father, revisit the barren landscape of the great batholith—still plagued with strange occurrences—and travel far afield…including to Japan and the eerily realistic world of Lafcadio Hearn (1850-1904) and his collection of Japanese ghost stories, themselves part of the novel’s fabric. While there, Rempart must penetrate a haunted forest replete with the echoes of suicides and unravel the secrets of a world that does and does not exist. And, at each step, battle demons that rise to thwart him, demons that few others can see.

Pence handles the various landscapes with precision and care; her central Idaho is as rough and jagged as the Sawtooth Range itself, and her creation of an alternate-world Japan brings to life images of lily ponds, stands of bamboo, woodcuts, and haiku. Her characters are empathetic, drawing readers smoothly into a world in which square-jawed Western sheriffs co-exist with shape-shifting demons, bad guys are as dangerous as the unknown powers Rempart challenges, and families are at once supporting and threatening. Love redeems…and love kills.

I would conclude by borrowing from my earlier review of Ancient Echoes: “An intriguing blend of history, action-adventure, religious speculation, alchemy (theoretical, philosophical, and practical), and horror, with occasional touches of psychological thriller and romance”—adding to that literary allusions as meaning and metaphor—Ancient Illusions fascinates, intrigues, and entertains. Highly recommended.