An Interview With Author Jeff Strand 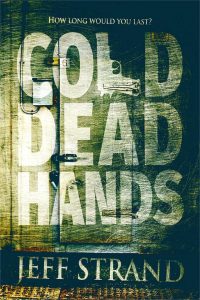 Jeff Strand is the notoriously dark comedic author of over 40 books including the Andrew Mayhem series, The Sinister Mr. Corpse, Pressure, Sick House plus several short stories such as Socially Awkward Moments With An Inspiring Lunatic and Two Twisted Nuts. A recipient of four Bram Stoker Award-nominations, Jeff is quite arguably best in the bizz at combining comedy and fear on the same page. This interview isn’t about any of that, but instead centers around his latest novella, Cold Dead Hands, which was released December of 2018.

Feel free to turn up the heat and get comfy as we discuss Jeff’s latest offering of cold terror and dark laughs.

HELL NOTES: So, how exactly does a person living in the idealistic warm climate of Florida get wired to write a story that takes place in the icy confines of a walk-in freezer?

JEFF STRAND: I’ve since moved to Atlanta, Georgia, but yes, Cold Dead Hands was written outdoors in beautiful sunshine! The story is more about all of the bad stuff that happens inside of the freezer than the actual temperature (though the temperature certainly causes problems) so it wasn’t as if I needed to shove my head inside my freezer for a few minutes at a time to get into the proper head space. I’d lived in Florida for a couple of decades when I wrote the book, but I grew up in Alaska, so it’s not difficult for me to recall the sensation of being cold.

HL: You seem to be churning out both full-length novels and the shorter length chapbooks at a pretty solid pace over the past few years in particular. At which point in the writing – either in the physical typing or the mental formulating of the writing – is it determined how long or short the story needs to be? Is it a conscious effort to decide or is the story always the boss?

JS: I almost always know if something is a novel, novella, or short story before I start writing. In the specific case of Cold Dead Hands, Cemetery Dance Publications asked me to write something for their novella series. So I had the word count parameters going into the project. I’d wanted to try a book that took place entirely in a single location yet was extremely fast-paced, and that was an idea that lent itself to novella length. I just brainstormed places a group of people could get trapped and settled on “walk-in freezer.” Then I came up with the motive for the bad guys and started writing!

HL: Rumour has it that you’ve got a film version of Cold Dead Hands in the works. What can you tell us about how the film project got underway and what we should we expect from the end result?

HL: Considering other film projects you’ve built from your stories, I’m imagining an entire series of Strand films with each new story you write. What gods need to be appeased for this to become any sort of reality?

JS: All of them! I’ve had nibbles of movie interest throughout my career but little of it went anywhere. My story “Gave Up The Ghost” was adapted into a segment of the anthology film Creepers that nobody ever saw, and the feature film version of my book Stalking You Now remains half-finished and may never be completed. But recently there’s been a surge of interest, including a couple of projects with the possibility of being Major Motion Pictures. Will anything happen with them? Dunno. All I can do is say, “Oooh, that’s pretty cool,” and keep the focus on writing books, since the movie stuff is out of my control.

HL: As the terrible events unfolded in Cold Dead Hands and the grocery store becomes an improvised war zone for every shopper’s worst case scenario, I had to wonder what your worst ever shopping experience was. Care to share?

JS: I’m a procrastinator, so every year at Christmas I’d be frantically shopping at the last minute. Except for one special year. I got it all done before I flew up to visit my relatives. It was glorious. No need to fight the crowds of stressed-out shoppers. No need to venture out in the cold. I could stay at my grandmother’s house and relax without a care in the world. But…my dad hadn’t done any of his shopping, and he said “C’mon and help me out!” So I had to fight the Christmas Eve crowds anyway. Argh!!!

HL: If you could summarize Cold Dead Hands in only 6 words or less for those who have yet to read any of your work and don’t know what to expect from you, what would you say?

HL: Once readers have enjoyed \cold Dead Hands, what other published treats do you exect to ave I store for us in the next year or so to look forward to?

JS: Next up is Ferocious, a tender tale about a man and his niece who are trapped in a forest full of zombie animals. I’m sure it’ll all work out okay, though.

To order your copy of Jeff’s latest novella, and others, you can visit his Amazon Store page here: https://www.amazon.com/-/e/B001K8D3F0

You can also visit Jeff’s personal corner of the web here for the latest updates and offerings: https://jeffstrand.wordpress.com/