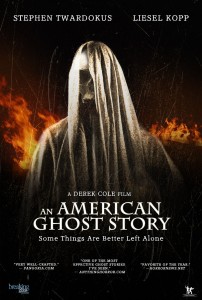 I usually don’t review low budget, independent horror movies. Is that because I’m an elitist snob? No, it’s because many to most independent fright flicks are just horrible. Yeah, I hate to be the one to point out that the emperor’s new clothes is just him walking around naked, but now that it is easier and cheaper than ever before to make a movie, a lot of people who probably shouldn’t be making movies now are making them. I know, I’m a horrible person for speaking the truth, but there it is. Deal with it.

That said, in the few instances where I have covered very indie movies, there was always something worth the time investment in the film to see. A powerful performance, an interesting story, a glimmer of directing talent. Some elusive ‘it factor’ that so many low budget flicks just seem to forget. And that is why I’m reviewing An American Ghost Story today. Is it a great movie? No, it has flaws, but the good far outweighs the bad here. So if you’re a fan of ghost stories and want to give the little guy his due, keep reading.

AAGS is about a thirty-something writer whose biggest creative achievement to date has been writing ads for a local small newspaper. Wanting to do something more and leave his mark, he moves into a reportedly haunted house. There he hopes to find out that the ghost are real so he can write a book all about the spooky happenings. Hey, if that could make the Lutz family famous…but I digress.

Before you can say “boo!” the old saw about being careful what you wish for comes true, and our would-be author starts having some ghostly happenings that ramp up as time goes by. And that’s about all there is to this movie. Yes, I’m serious. It’s a standard ghost story (American or otherwise) that does nothing new and has few, if any, surprises in regards to the plot. All the haunted house tropes are in play here: the cupboards that open by themselves, the creepy whispered voices, ghosts crawling into bed with people, the interviewing of past residents of the house who are now certified cuckoos, etc. So if you’re looking for new or innovative in your ghost movies, An American Ghost Story is not the film for you.

However, while it does nothing new with the ghost story subgenre, what it does, it does pretty well. There are good moments of creepy atmosphere here, some effective (and thankfully not overused) jump scares, and a pretty decent performance from our star, Stephen Twardokus, who is also credited as the film’s writer. There is also a well done ghost under a sheet gag that looks as good here as it would in any big Hollywood film. So if you want a mostly effective ghost story that usually succeeds at being frightening, then An American Ghost Story might just do that for you. And really, as long as a horror movie can pull that off, I’m happy.

The DVD from Breaking Glass Pictures even has some pretty decent extras on it. There is a commentary track with the director Derek Cole, writer/star Stephen Twardokus, and actor Jon Gale who has a small role as the house’s landlord. There is also a behind-the-scenes featurette and a small collection of deleted scenes. All in all, not too shabby for an indie DVD release. Hell, some big budget films still come out today with less goodies than what is on this disc, so kudos to them for that.

An American Ghost Story is a decent horror film that delivers the goods more often than not. Even if you’ve seen all its tricks before, they’re still good tricks, and always worth a watch in my book. So for that reason, I can give this film a recommendation for the diehard ghost lovers out there. If that’s you, then give this flick a try. I’m betting you’ll like it.