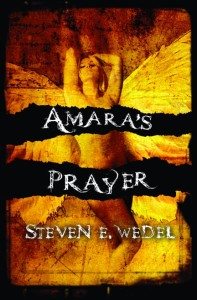 Amara’s Prayer is hands down the darkest novel Steve Wedel has written to date.  If you’ve read anything at all by him then you already know he doesn’t pull punches.  His works have been known to contain dollops of violence, sex with wolves, even a severed male appendage or two and are clearly not bound by inhibitions.  Yet, beneath the layers of total brutality are the questions the readers are forced to ask themselves as they weigh out the warring emotions of trying to figure out what to believe in and at what cost.

Reverend Milton Agnew begins his downward spiral deep within the Brazilian jungle after being summoned by the terrible news that his entire parish had been wiped out  after a  fire swept over them without warning or mercy.  Milton’s elders had frowned at the idea of the church’s money being spent on this mission in the first place and now here he was, alone in the jungle burying the charred and deceased while fighting to find words to comfort their families.  It’s not long before the preacher becomes fallen to the depths of supernatural seduction in a story that holds so much more than what’s at first sight on the page.  Amara’s Prayer will no doubt leave a unique impression for each person who reads it depending on the questions each reader seeks.  The novel, written as the author’s  university thesis and inspired by event that occurred there, does not tread lightly on controversial ground..

The core of Milton’s suffering comes by way of a curvy and very naked red headed woman who emerges from the jungle like an apparition.  With the raw stench of scorched flesh hanging fresh in the air, she comes to him as a lost and innocent child who appeals to his do-good heart.  She’s a runaway, after all, owned by a bad man who used her as his personal sex slave.  She confessed to sneaking around the missionary, listening in on Milton’s sermons, but with nowhere left to go except back to her slave owner or deeper into the jungle, well, what’s a preacher man to do?  In Milton’s case he smuggles her back home to his family, much to their chagrin and the beginning of his damnation.

Promising to be her savior and her path to a brighter future in civilized society, Milton ignores his wife’s pleas to get rid of the harlot that promises to seduce them all.  It’s not long before his wife isn’t the only problem to fix.  His son’s hormonal intentions are hardly pure while Ms. Ideal Daughter who’s never swayed from her parent’s lofty expectations is bitten by Amara’s charm, never to be the same again.  What comes next for Milton goes beyond all levels of human depravity.   With Steve Wedel’s unflinching pen at the helm, it’s as easy to pity as it is to feel shame towards Milton, and as the preacher finds himself being magnetically drawn closer to Amara, so too does he find himself being sucked straight down into a proverbial  rabbit hole from  hell.

Despite seeing Amara for who – or what – she truly is, Milton can’t help but fall further than he ever thought possible.  How much could a man, even a man of God, truly endure before no longer possessing the forgiveness his temptress insists on getting.  And if you ‘re concerned Steve Wedel might be at risk of losing yet another government job, don’t be.  Prepare to have your core shaken and examined while tagging along with the tortured reverend as he battles it out with faith and the supernatural until the only question remaining is, “what do you cling to when all is lost?”  Deeply engaging, highly recommended.

Available for purchase through Bad Moon Books, which you can and should order HERE