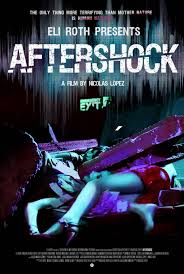 Eli Roth is quite the paradox. He is one of the new members of the horror elite without, in my opinion, ever having done a classic horror film. In the press and in his so called “acting” roles, he is supremely annoying and hard to take. Early on he attached himself to the coattails of Quentin Tarantino and has carved out a quite lucrative career in modern horror cinema. His first film, Cabin Fever, was an ode to the films of Sam Raimi and George A. Romero, and was praised by those filmmakers and horror fans alike. I hated the film and still cannot believe it has such a glowing reputation. His next two films were Hostel parts 1 and 2. I liked both of those films very much and found them to be full of original ideas and creatively twisted black humor. Roth’s fake trailer in the massively underrated Grindhouse was funny and original as well; however his acting in the Death Proof segment made me want to claw off my own skin, as did his turn in Tarantino’s Inglorious Basterds and Alexander Aja’s Piranha 3D.

Despite all of these annoyances, I still look forward to seeing the next project, any project, where Roth is involved, be it as director, writer, or producer. He has created a new series for Netflix, Hemlock Grove, which I will be reviewing soon and am anxious to see. I feel that he does have a respect for good horror and is surrounded by great filmmaking partners and will, someday, be involved in a truly great horror film.

Roth “presents”, produces, writes, and stars in the new film Aftershock. It is a film made in Chile’ by filmmaker Nicolas Lopez and concerns a group of twenty something partiers whose night of fun is disrupted by a 9.5 earthquake. As the ads promise us, what they encounter after the quake is “even more terrifying!”

The film was picked up by Bob and Harvey Weinstein’s Dimension Films at last year’s Toronto International Film Festival and received some good buzz. The theater I saw it in last night was almost completely full, and you could feel the anticipation of the auditorium filled with horror fans waiting for the next big thing.

Well, I am here to report that Aftershock is the second worst horror film I have seen this year; the first being the head scratching, ineptly bad Texas Chainsaw 3D. In fact, it is not really a horror film. I guess you could call it a disaster/horror film but that would be a stretch.

The first half almost plays like a low rent version of The Hangover and, trust me, it goes on too long. Set up is important but we literally get 45 minutes of parties, drinking, and raves. Watching Eli Roth take center stage during these already tedious proceedings makes it even harder to bear. The party boy set up actually works in Roth’s own Hostel films because he didn’t spend too long setting it up. Here, the film is more than half over when the carnage begins.

The disaster sequence of the film lasts for five or so minutes as the earthquake lays waste to the rave and most of its patrons. After spending the first half of the film with some of the most repulsive and annoying characters I have seen in a while, I was rooting for the earthquake.

Since this is being sold as a horror film , and the fact that a lot of it was written by Eli Roth, during the quake we are witness to limbs being severed, torsos being crushed, skulls being demolished, and other grotesque events. This is only the beginning.

The film has multiple personalities, and that is one of its major problems. It wants to be a modern disaster film, a party film, a horror film, a comedy, and a gore fest. It is fine to mix a couple of genres, but here the filmmakers are all over the place in style and tone, with the final act being a complete rip off of the Hostel films. Towards the end of the film we are introduced to a sort of mad and brutal killer who begins to chase those left alive through dark sewers like an overweight and tattooed Michael Myers without a mask. This comes out of nowhere and feels tacked on.

After the quake, the survivors set out to make it through the devastated city and find safety. What they find is a city in ruin and filled with psychotic street thugs who want blood and sex. All of the sudden we find ourselves in a South American, suburban, Last House on the Left. In trying to run from the thugs we are treated to decapitations, rapes, and a character being burned alive. I am not anti-gore, especially in horror, but I do feel it has its place, and in a film like this it shouldn’t be so outrageous. There were a few walk outs during the rape sequences. That’s right, there is more than one and they are graphic, violent, and unnecessary.

Aftershock is not an ode to the Irwin Allen disaster films that excited audiences in the 1970’s. It is not a fun horror film with a comedic first half, as I have heard it described by a few audience members. It is a film full of rape, torture, and blood that is meant for our entertainment. I can defend films such as Roth’s Hostel series and Tobe Hooper’s The Texas Chainsaw Massacre as being entertaining films full of gore and torture because those films had a sense of style and creativeness. They were grueling and relentless in their horror but never alienated their audiences and, at times, both films had their tongues planted firmly in their cheeks. In Aftershock there is no subtlety or emotional center to the filmmaker’s litany of ugliness and depravity. We are not having a good time.

I don’t enjoy writing scathing reviews. I would rather blabber on and on about my love for a particular film than have to relive the disappointing film I just watched. With Aftershock I left the theater angry and massively disappointed. I hated it.

Eli Roth seems to know, and is a huge fan of, good horror, but this time he and director Lopez have made an abysmal failure. Please Eli, stay behind the camera and focus on doing better work. Even though you are a horrible actor and have not yet tapped into your full abilities that I am confident you possess as a director, I must quote a line from the film Brokeback Mountain, “I don’t know how to quit you.”