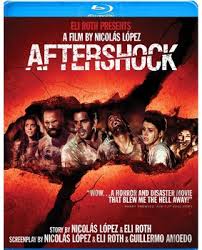 “Bad things happen to bad people.” That’s really what this movie should have been called. Or perhaps, “Watch people you could care less about die.” Something along those lines, if I was feeling charitable.

Now let’s get something straight right from the start. I am not an Eli Roth hater. I know in certain horror circles it is fashionable to bash the guy, but I like him for the most part. I liked both Cabin Fever and the first Hostel films for what they were. I liked him as the “Bear Jew” in Tarnation’s Inglourious Bastards. And while I have never met him personally, in every interview I have seen him in, he seems like a pretty OK guy. If nothing else, he’s an honest to goodness horror fan, and not just someone playing the part. That said, I don’t give anyone a free pass. I thought his Hostel 2 was a derivative cash grab that failed to grab any real cash. And Mr. Roth wrote and stars in this movie, and yet I really didn’t like it. So there, hopefully it is clear that I am neither a Roth fanboy nor someone that burns effigies of him in his spare time. This review is 100% about the movie and the new Blu-ray release and nothing else.

And as far as the film goes, it is bad. Not horrible, not laughably bad, not incompetently made, but a mix of boring with characters that I could either not give a damn about, or those that go out of their way to annoy me. Chief among them is a bald and bearded douchebag that seems to be going out of his way to impersonate Zach Galifianakis’ character from the Hangover. And no, that’s not a good thing for me. But I’m getting ahead of myself, so let’s do this paint by numbers disaster thriller by the numbers.

The story is about three guys partying it up in Chile. There’s the somewhat wimpy Ariel, and the aforementioned, oh-god-please-shut-the-hell-up annoying total tool of Polo, both of whom are locals looking to show Eli Roth’s American character, who I think is actually named Grigo as I can’t remember him being called anything else, a good time in their country. This trio parties and parties and parties for far too long in a movie about a killer earthquake without the quake ever showing up. Anyway, they meet three girls and continue to go clubbing, drink, and take drugs, and just when the viewer is about to fall asleep, at long last the earthquake hits. Sadly, as a low budget flick, the disaster is very underwhelming, but then so is just about everything in this movie, so why should that be any different? The remaining half of this flick is the six people wandering around the destroyed town, looking for help, overcoming dangers of both the natural and human kind, and slowly losing members along the way. And that’s about it. So again, it’s not a bad movie, but it’s just sort of blah and bland and a bland movie is far harder thing to sit through than a bad movie, as least to me.

As for the extras on this new Blu-ray from Anchor Bar, there is a pretty good commentary track with director Nicolas Lopez and writer/actor Eli Roth. Listening to it does make watching this movie more enjoyable, so I do recommend giving it a listen. There is a featurette on the international casting involved with making this movie and a making of behind the scenes look.

I can’t recommend Aftershock, but I can’t bring myself to rail against it either. It is a so-so film, and if watching so-so disaster flicks is your thing, then maybe you will enjoy the shaky and bumpy ride this movie offers. For people looking for more than mediocrity in their movies, you will want to pass on this one.