A Tribute to Ray Bradbury: So Many Memories 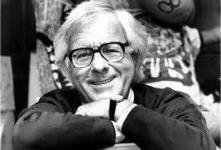 Rather than pay tribute to Ray Bradbury the legendary author (and I concur with everyone who will praise him for the way he could weave a sentence and challenge the mind) I’d like to share some of my memories of the man. He was one of a kind and, well, one of a select few who seemed a bit embarrassed by all the praise heaped upon him.

I first met Ray Bradbury via snailmail when I was a 6th grade teacher. Rather than have my students read stale basal readers I would cut out stories by contemporary authors and make Xerox copies for my entire class. Richard Matheson, Bob Bloch, Stephen King, Henry Slesar were among my student’s favorites, as was Ray Bradbury. My students would read Ray’s wonderful excursions into the unknown (“The Playground” and “The Crowd” were two of their favorites), critique the stories and attempt (without too much success) to write a Bradbury-type story. I had his address and sent my students’ letters to him, without much hope he’d respond. I didn’t know until several years later that Bradbury (like Bloch and Matheson) didn’t have an assistant to handle his mail. He was his own secretary. Two weeks after I sent the letters my class received a typed response (complete with typos he was famous for) from the man himself and a poster he signed for my class.

Several years later (1991) Gauntlet Press published its second book, Bob Bloch’s Psycho, a classic-revisited. When I asked Bob who he suggested write an introduction and Afterword for his novel he told me he had no idea. He didn’t think his work was worthy of his contemporary’s commentary (another truly humble man). He did allow me to hunt for someone on my own. The first two authors I contacted both said yes – Richard Matheson and Ray Bradbury. Bob Bloch received Matheson’s Afterword and Ray’s Introduction the same day he found out he had terminal cancer. Bob called and told me how it made the terrible news seem far more bearable when he read what his friends had to say about him. Both Richard and Ray spoke about the impact of Psycho, but spent most of their words talking about Bob Bloch the man; what a wonderful person and good friend he was to both of them. I haven’t read an Introduction or Afterword that was any better.

My son David is my Los Angeles Gauntlet Press representative. He had the privilege of bringing tipsheets to Ray to sign. Ray didn’t enjoy signing tipsheets. Few authors do. David would bring a stack of tipsheets over to Ray’s house. Ray would sign until he was tired and my son would leave. It took 3-4 trips to sign tipsheets for one of our books. I was envious of my son. Why? While signing tipsheets (with David turning each one when complete) he would regale my son with stories. He told David how he had had a dream the night before and woke up to begin writing a short story based on the dream. He told David of his trips to Mexico and Paris. He told David of a pedestrian mall he had planned. He wanted loads of table so people could sit down and talk to one another, rather than converse through emails. David and I visited the Hollywood and Highland mall he had planned. It was just as he had explained it to my son, with loads of people engaged in conversation.

And, finally, there was the artwork for the cover of The Illustrated Man. Ray was known not only for his doodles, but also his oil paintings. He was a true Renaissance man – an author and an artist. The Illustrated Man was the second Bradbury book we published. I asked Ray if he would be willing to provide us with original artwork for the book and he agreed. Several weeks later I received a fax from Ray; the cover art for the book, along with a note asking “Is this good enough?” How many people of Bradbury’s stature would ask for a publisher’s opinion? Was it good enough? It was perfect.

Ray Bradbury was not only a one-of-a-kind writer. He was a unique and gracious human being. As much as I’ll miss the author I’ll miss the man even more. Thanks, Ray, for the wonderful memories.