A Study in Emerald – Game Review 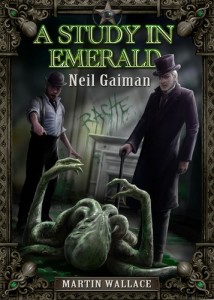 A STUDY IN EMERALD
Designer:  Martin Wallace
Publisher:  Treefrog Games
Platform:  Board Game
Current Price:  $79.99 via CoolStuffInc.com. Originally $70 via Kickstarter, can be bought for between $70-85 from secondary market, though prices have been trending up

A Study in Emerald is based on the Neil Gaiman short story of the same name.  The premise of the game is that the Cthulhu Mythos Great Old Ones have been in positions of power for years and the Restorationist faction is trying to oust them from power.  Opposing them is the Loyalist faction which finds the Great Old Ones to be doing a dandy job in running the planet and wants to keep them in these positions.  This game assigns players the roles of the Loyalists or Restorationists, but does so in secret, so you’re never quite sure who’s on your side.  In the end sides are irrelevant as there is only one winner.  It’s how you come to determining the winner that makes A Study in Emerald unique.

OVERVIEW
In this game, players are utilizing their influence, agents, and other special powers to take control of cities, assassinate or hide royalty (the Great Old Ones in disguise), and push the world toward war or revolution in an attempt to score the most victory points.  It does this by mashing together the Cthulhu Mythos with Sherlock Holmes and some other historical characters.  I was initially put off by this theme, but I have an affinity for Martin Wallace games, so I gave it the benefit of the doubt and jumped on board for the Kickstarter campaign.  At its heart, Emerald is a deck-building game with cards that serve multiple purposes – either granting resources or, occasionally, providing actions that advance one’s cause.  Each city contains a spot for cards that can be bought to augment ones deck.  These include one-time action cards like Hired Assassins that leave your deck once used, but can also include other cards, like the Freemasons, that allow you to cycle through your deck faster or agent cards that act like influence cubes and provide tiebreakers for control of cards, cities, etc.  During the game, you may attempt to assassinate or hide the royalty, kill off other agents, turn people into vampires, spread zombies across the world…it really does smash together a lot of different genres and despite my skepticism, I discovered that it works rather well.

COMPONENTS
As is typical of Martin Wallace/Treefrog games, the components are excellent.  During pre-production, I saw pictures of the board, and to be honest, I thought it was rather garish, with bright pink and green and an overabundance of tentacles all over it. 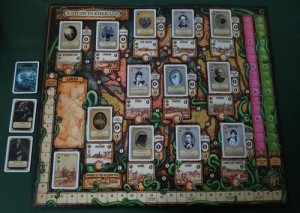 The bright and busy board is contrasted nicely by the muted cards.

The card art, however, is well done and when the cards are on the board, they seem to take some of the visual sting out of it.  The wood bits are standard fare and the cardboard tokens are all nice and thick, again par for the course for MW. 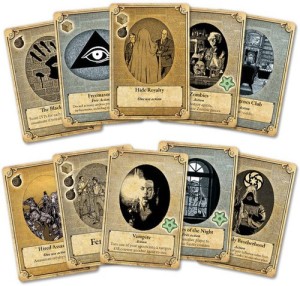 The zombie meeples are pretty neat and are nicely made, though I did get one that doesn’t stand well.  Fortunately, the cards take care of the money resource, so we aren’t subjected to the tiddly-wink style money that is usually included in Wallace’s games.  Everything is nice to look at and I never once felt like I got shortchanged for my money.

RULES
Another comforting sight is Wallace’s rulebooks.  They follow a standard pattern and are usually well-laid out with respect to learning and this is especially the case with this game as there are quite a few rules that need initial explanation.  The game aids are nice as well.  One of my biggest concerns that I would have for new players of this type of weight of game is the number of exceptions and special cases for things like vampires and zombies.  I consider myself a pretty seasoned gamer, but even I had to go over the rules a few times before I was able to teach this.  Once you start playing though, turns are quick and you often know what you are going to do before your turn comes up.  There is minimal downtime, something that tends to scare me in 4- and 5-player games of this type.

One thing of note – you aren’t going to want to play this with less than 4 players.  This is the type of game that conveys a particular experience with more players that cannot be replicated with fewer players.  This brings me to one of my favorite elements of the game – the scoring.  During the game, only certain points are tracked, since game end scoring is asymmetrical for the two sides.  Restorationists score points for assassinating royals, which Loyalists do not score for, but Loyalists score points for assassinating agents and controlling vampires, etc.  The biggest twist is that if you score the most points, but one of the other players in your faction scores the least, EVERYONE in your faction loses.  The winner is then the player who scored the most for the other faction.  This makes everyone kind of keep tabs on everyone else.  At some point, everyone is going to feel like they’re losing and then everyone is going to feel like they have a shot to win.

GAMEPLAY
How does it play?  Well, once you get the 20-30 minute rules explanation out of the way, the turns fly by.  There are so many different places to place your influence so there are always lots of good choices and always something to do.  Many of the cards twist the rules in a way that is completely opposite of what you are normally doing.  Claim that Cthulhu Permanent Effect card and watch as an entire city is decimated.  Grab Bismarck and the next time he comes up in your deck, you lock down a whole city.  Good fun stuff all around and since not all of the cards are used every game, there is plenty of variety, for sure.

One of my biggest knocks on the game is that you can never be sure how long the game is going to go.  In my play of this, I could have literally ended the game in 15 minutes as I had the money to travel to a city where a player’s main agent was located and I could have then assassinated him.  If he was a Restorationist player (which he was), the game would have ended immediately.  Since I didn’t, the game ended up being about three hours, something that I know isn’t for everyone.  The other thing that might be a turn-off for some folks is that the later part of the game became a tug of war, taking cities back and forth from each other.  This could just have been our lack of experience, but is something to take note of.  Regardless of these issues, the game was interesting, fun, and we were engaged throughout.

FINAL THOUGHTS
A Study in  Emerald is a very enjoyable game, made even more so if you are into the theme, which is a bit odd in pairing Holmes and Cthulhu.  I wasn’t sure if I’d dig it, but the time flew by and I was constantly thinking about what my next move would be.  This is a sign of a good game.

All of the elements work well together and make for lots of interplay between each other as well as the players.  The hidden roles don’t stay that hidden for long as soon enough, you have an idea as to which side someone is fighting for, but you’re never 100% sure.

That said, it isn’t for everyone.  It has some backstabbery and the game can get messed up if someone isn’t paying attention to the fact that their main agent is at risk of getting killed early.  If you are willing to take a chance on something a bit different and can get your hands on a copy of this game, do so, because it’s fun and delivers an interesting experience.  In the end, isn’t that just elementary?

Rating:  7/10 (but room for improvement with additional plays)