A Sharp Stick in the Eye – Book Review 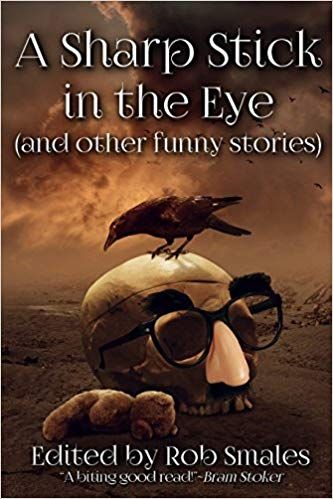 A Sharp Stick in the Eye (And Other Funny Stories)
Rob Smales, Editor
Books and Boos Press
August 14, 2018
Reviewed by Elaine Pascale

I had been looking forward to this release for some time. As a fan of Smales’ writing, I was excited to see what he would produce as an editor with a theme that is smack dab in the center of his wheelhouse. A Sharp Stick in the Eye is a charming tale embedded in Smales’ introduction to the anthology that establishes the reason why you will enjoy the perverse humor found in the book. Basically, if you enjoy the unexpected and the myriad of ways in which the unexpected can be interpreted, then A Sharp Stick in the Eye is for you. The stories are a wonderful combination of horror and comedy offered by some exemplary writers.

I am a sucker for a good hook and Brian Asman’s opening story “Vengeance is Mine” begins with a winner: Chip’s fate was sealed by a carton of yogurt. The story follows a man’s struggle to find the perfect way to kill his roommate and pin it on someone else. The narrator, while a complete loon, has an engaging voice that delivers humorous quips with rapid fire. The other stories in the anthology provide considerable punches, as well:

“A Trunk Story” by John McIlveen: Fergus Huddy owns a car dealership and his name alone should serve as some kind of a warning. He has a haunted car on his hands that is plagued by an otherworldly stench coupled with the ability to cause severe migraines. McIlveen does a commendable job of providing satirical characters that fail to fall into stereotype.

“Norwegian Wood” by Roy Bryan Bishop: Reuben Butterfly (seriously, this anthology has some of the best names) is a “fish out of water” constable in Norway who encounters a horrifying yet quaint, old world disaster. “Norwegian Wood” is an engaging story-within-a-story that provides a devious background to Christmas celebrations.

“Route” by J.C. Raye tells of the horrors of delivering mail to the elderly community. Despite their age, the seniors deliver Lord of the Flies-level disorder and dangerous group think. This is a creepy and anxiety-provoking tale.

“My Corner Office” by Martin Zeigler: As a former manager, I was triggered by the laziness of the narrator, until she got an office mate and it became a very twisted Bartleby the Scrivener. Zeilger’s story confirms that work can often be a war of attrition.

“The Same Deal” by Daniel Becker: Jimmy learns the truth about monsters from his older brother Alex. This story is a compelling Goosebumps for grownups in which the quest for survival causes a horrible deal to be brokered.

“The Three Little Piggs” by David Price: This is a delightful homage to the late, great George Romero while sticking to the original fairy tale formula. I tried to turn the puns into a drinking game but needed to remain sober so I could keep reading.

“Al’s All Nude Barbeque” by Wayne Faust. This story is about a yearly nude barbeque in Key West, which is horrific in and of itself. The locals have a terrifying way of decompressing after tourist season.

“My Dinner with Krampus” by James FW Thompson: What if there had been a mistake in the naughty/nice list from holidays past? Leave it to Krampus to sort it out by any means necessary.

“There is a Zombie in My Office” by Jim Horlock references the original zombie myth by creating efficient, yet disturbing, corporate workers. This story explains a lot about every HR I have ever encountered.

“Nerds vs. Jocks vs. Cthulhu” by Eric Cline is a tongue-in-cheek homage to Lovecraft, highlighting his lack of political correctness. The story epitomizes the aphorism the best revenge is living well, or perhaps living at all.

“Case of the Killer Beard” by A.P. Sessler: I have never been fond of beards and this story solidified my dislike of the property of the overly hirsute. A very clever tale of facial hair gone wrong.

“Contractual Obligations” by Renee Miller: I always enjoy stories that contain an anthropomorphic Death and this was no exception. In Miller’s story, Death would like to resign. Unfortunately, Angelic Resources is no help and his replacement can’t get the hang of execution.

“Clyde the Necrophile” by Jeff Strand: Don’t worry, Clyde has an explanation for why the necrophile moniker was attached to him. I found myself hating Strand while I was reading for making me sympathize with Clyde. This story substantiates Strand’s reputation as an exquisite story teller; it was the perfect way to end the anthology.

There is a nice consistency to the “voice” amongst the authors, signaling a sound editing job by Smales. While a humorous book, the authors are all entrenched in the horror world, making this a must-buy for a broad audience. I truly enjoyed this anthology as it made me laugh out loud during a time in my life when I needed that release. I highly recommend A Sharp Stick in the Eye whether you want a laugh, a chill, or simply to read some very good stories by very good writers.