A Season with the Witch by J.W. Ocker – Book Review 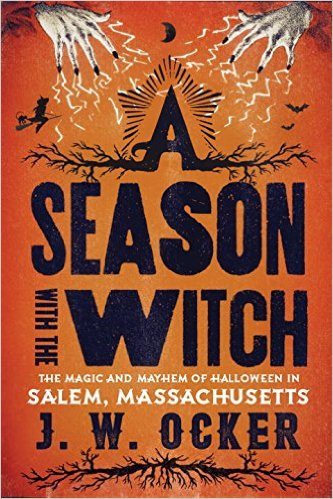 A Season with the Witch: The Magic and Mayhem of Halloween in Salem, Massachusetts
J.W. Ocker
The Countryman Press
October 2016
Reviewed by David Goudsward

J.W. Ocker doesn’t do things halfway. His previous book, Poe-Land, won an Edgar Award for his travels up and down the east coast, visiting locations significant to Edgar Allan Poe, and explaining why they are significant to those associated with the area. This time, Ocker took the opposite approach — he moved his apparently very patient wife and children to Salem, Massachusetts, and stayed for the entire month of October. October is to Salem what Mardi Gras is to New Orleans – a frenetic collection of eclectic people, places, and activities that build momentum and culminate in a concentrated release of weirdness. And instead of going to Salem, the Ockers lived downtown, totally immersed at Halloween’s ground zero.

Ocker isn’t looking to do a travelogue on which haunted attractions are tourist traps and which bookstores are the creepiest. He is looking for what makes Salem so uniquely Salem by experiencing it firsthand. A Season with the Witch does that by chronicling his travels among the shops, sites, and gravestones, carefully interspersed with chats with the denizens, critics, and characters of Salem. From carnies and occultists, to archivists and elected officials, to street preachers and shop owners, Ocker carefully records their often conflicting observations.

Be it ghost tours, cemeteries, historical sites, filming locations, museums, gift shops, street performances, parades, haunted houses, or wax museums – if it happened in Salem, Ocker sampled it, and then wrote about it in his deceptively casual style with the appropriately gentle humor side comments.

Can it be used as a travel guide to Witch City? Absolutely, but you risk missing the sites because you are engrossed in the book. Better to read it first and use a mundane travel guide.

There are not many books that can gracefully segue from Cotton Mather and The Scarlet Letter to Elizabeth Montgomery and Laurie Cabot, but this is Salem, where oddness is a lifestyle, and J.W. Ocker is a masterful observer of the foibles, frailties, and fears of the human condition.