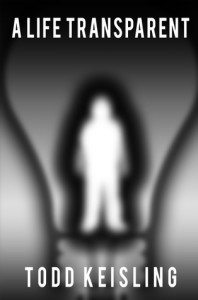 Todd Keisling is the author of A Life Transparent and The Liminal Man, both of which deal with the character of Donovan Candle: a rather ordinary person who works hard at the mundane things of life so he can take care of his family and not be troubled with the more important aspects such as happiness and satisfaction and self-fulfillment.  The fact that he inadvertently gets involved in rather bizarre situations is what gives these two novels the cutting edge they need to stand above the rest.

The novel, A Life Transparent, is the first in this series and introduces the reader to Donovan Candle and the boring job he has as a telephone salesman.  He tries to make the everyday quota of sales and to work his way up the ladder to a better position, but his heart just isn’t in it.  That doesn’t stop him from being disappointed when he doesn’t get the expected raise or promotion.

When Candle leaves work, he goes home to a wonderful wife.  However, truth be told, he’s bored with his marriage as well, but attempts to hide it from his spouse.  He does admire his brother, and the freedom the man has as a private detective.  He even uses his brother as the main character in a novel he’s been working on for years, but can’t seem to finish.

In other words, Candle’s life is weary, tedious, and uninteresting.  He’s not happy with the ways things are, but hey, that’s life.

Things, however, begin to slowly change as Candle starts seeing bizarre apparitions and appears to become transparent to those around him.  The man believes he’s becoming crazy.  All of that really takes a dive for the worse when Candle’s wife is abducted by a mysterious stranger, who believes he needs a little excitement in his rather boring life.  To get his wife back, Candle has to find a person who somehow managed to escape the clutches of the stranger.  Unfortunately, once the person is found, Candle realizes that he’s in for a bigger fight…one he might not win without the help of his brother.

What makes this story so good is the underlying theme about how so many people are truly bored with their jobs and marriages and lives.  Boy, did this novel hit the nail on the head.  The fact is that the majority of people fit this description to a tee.  They’re living their lives with a ho-hum attitude and don’t know how to change things for the better or to escape their dire predicament.

What Todd Keisling offers the reader is a supernatural answer to their apparent dilemma, which will hopefully open their eyes to the reality of their life and how lucky they actually are.  Often times it takes something drastic to wake a person up so they can see what’s really holding them back.  In most cases, it’s simply themselves and their fear of achieving the things they want.

A Life Transparent makes you think and question your own life and how to change a negative into a positive without having to go through what Donovan Candle experiences.

I’m avidly anticipating the second book in the series, The Liminal Man, and finding out where Donovan Candle is in his life and how he’s changed it so he experiences more happiness and fulfillment with his wife, the upcoming child, and his new job with his brother.  I suspect that novel will make the reader think as well, which is always good.  We need to be questioning our lives so we know if we’re on the right path or not.  Books that make you think and question your reality are simply the best, and I wish there were more of them for the readers out there.